The Increasingly Dangerous Politicization of the U.S. Military 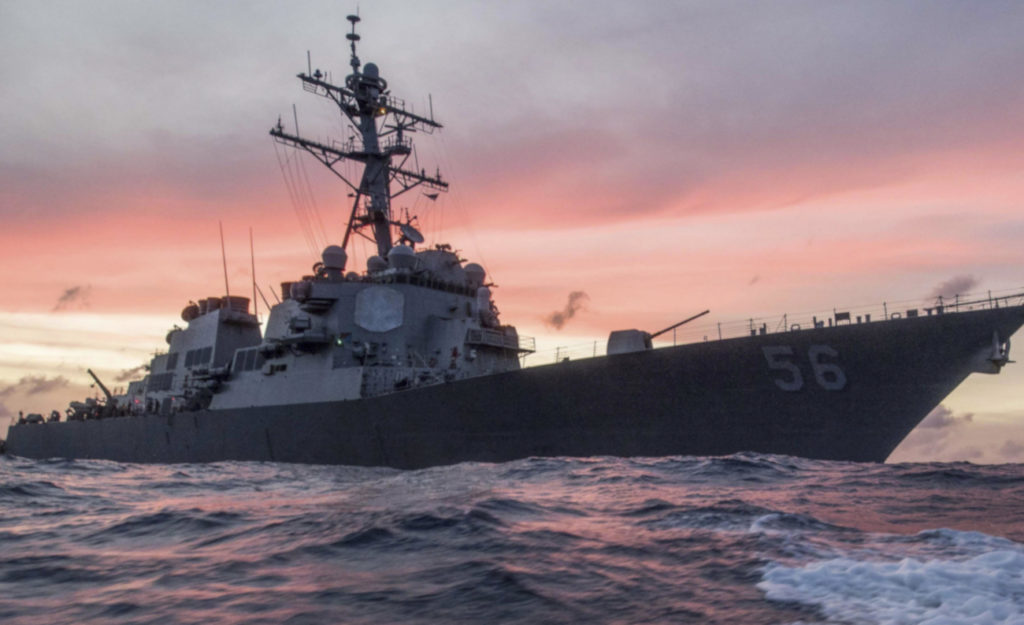 The U.S. military has been America’s most trusted institution for decades. It has managed to remain above the partisan political fray that has consumed many once-trusted cornerstones of American public life, from the church to schools to the Supreme Court. Yet the military has also become increasingly politicized over the past few years, in ways that profoundly threaten its reputation for nonpartisanship — as the recent imbroglio over the USS McCain demonstrates all too well. Left unchecked, this trend may gravely endanger the military’s ability to give trusted advice to future presidents and policymakers — which would have disastrous consequences for the nation’s security.

Using the U.S. military to score political points is a relatively recent phenomenon. Today, both major political parties assiduously recruit retired senior military officers to support their presidential candidates. This would have been unthinkable throughout most of American history, as retired senior officers deliberately steered clear of electoral politics. That changed in 1988, when retired Commandant of the Marine Corps P.X. Kelley endorsed George H.W. Bush for president, and in 1992, when a former chairman of the joint chiefs of staff, retired Admiral William Crowe, controversially endorsed Bill Clinton. Since then, both the Democratic and Republican national conventions have regularly featured a phalanx of retired generals and admirals lined up on stage behind the presidential nominee. But the politicization of the military grew even worse during the 2016 election, when retired Army Lt. Gen. Michael Flynn and retired Marine Gen. John Allen were featured speakers at the Republican and Democratic conventions, respectively. As we wrote at the time, these speeches sharply undermined the nonpartisan reputation of the U.S. military.

Since taking office, the Trump administration has further upended longstanding norms of military nonpartisanship. President-elect Donald Trump began to speak regularly about “my generals,” placing a personal stamp of ownership — and by implication, alliance with his party — on the senior officers he would command over the next four years. He staffed his administration with many retired generals and admirals, clearly rewarding some for their public support during the election. Flynn was named national security advisor, serving briefly before being overtaken by scandal. Retired Marine Gens. John Kelly and James Mattis were named to lead the Departments of Homeland Security and Defense respectively, and Lt. Gen. H.R. McMaster was tapped to be the national security advisor while still on active duty. At times, it was unclear whether Trump made any real distinction between the retired generals he appointed and those still serving the nation in uniform, seemingly seeing both as extensions of his administration.

The president has continued to shred longstanding norms of military nonpartisanship in many other ways. In his first trip to the Pentagon as commander-in-chief, he signed a controversial bill restricting immigration in the Hall of Heroes (which honors those who have received the nation’s highest military award, the Medal of Honor) with Secretary of Defense Mattis at his elbow. Two weeks before the 2018 midterm elections, he described a convoy of Central American refugees moving northward as a national emergency and hurriedly deployed active-duty troops to the Mexican border — even though the caravan, composed mostly of harmless refugees, posed no serious threat to U.S. national security. After Congress later blocked funding for his border wall project, Trump decided to fund it by diverting what will probably total $2.5 billion from the military budget. And shortly before Memorial Day, he signaled his intent to pardon a number of U.S. military members accused of war crimes, some before their cases had even gone to trial. After an extraordinary outpouring of objections from retired senior military officers, Trump has apparently delayed any decision on what would be an unprecedented intervention into the military justice system.

Both the president and vice president have spoken to troops using language normally reserved for partisan political rallies. The president has also employed explicitly partisan language in his holiday telephone calls to thank military personnel for their service. He has used these traditionally nonpartisan calls as opportunities to bash Democrats, complain about the judiciary, and opine about divisive domestic disputes on trade and border security. Disturbingly, some of his visits to military bases have taken on other trappings of politics, with the distinctive red hats featuring the Trump campaign slogan “Make America Great Again” spotted during presidential visits to Iraq and Germany. While some of these displays by troops do not strictly violate Pentagon guidelines, they remain an unwise expression of political support among a uniformed audience that the nation should always view as strictly nonpartisan.

The controversy surrounding the USS John S. McCain during the president’s visit to U.S. sailors in Japan last month is the latest blow to the norms of military nonpartisanship. Before Trump’s visit, members of the White House military office asked the Navy to either move the warship out of sight or conceal the name of the Aegis missile destroyer, which was in port for repairs. The reasons were unabashedly political. Staffers feared that the president would be offended by seeing the name of a ship that honors his longtime (and now deceased) political rival, Sen. John McCain, as well as his father and grandfather (who were both four-star admirals). The Navy worked hard to comply, placing a tarp over the ship’s name. Eventually, senior Navy leaders found out about the request, and it was quashed by the three-star admiral commanding Seventh Fleet. The tarp was removed the following day, before the president’s speech.

The scandal drew so much attention that the acting secretary of defense asked his chief of staff to investigate. Shortly afterwards, acting White House chief of Staff Mick Mulvaney gave an interview that he could have used as an opportunity to condemn this blatantly partisan and inappropriate White House directive. Instead, Mulvaney implicitly endorsed the request by describing it as “not an unreasonable question” and “much ado about nothing.” This alarming judgment will further encourage senior elected officials to misuse the military for pursue purely political goals.

Since Trump is disrupting all sorts of other norms about how U.S. presidents should behave, it may not be surprising that he and his administration are smashing the norms of military nonpartisanship as well. But the repercussions of these actions are enormous, because they fundamentally threaten the future effectiveness of the principal institution upon which the nation’s security rests. During military crises, the country’s senior military leaders must be able to deliver trusted, objective advice to elected officials. Those military leaders are the nation’s exclusive experts on the conduct of war; there are no alternative sources of tactical and operational expertise that decision-makers can rely upon. If their advice comes to be seen as compromised by partisanship, the nation’s elected leaders will not be able to objectively assess their military options, and their life-and-death decisions about when and how to use force will suffer immeasurably as a result.

Reversing the increasing politicization of the military needs to be a high priority for both the Pentagon’s civilian and uniformed leadership. They should:

A strictly nonpartisan military is a fundamental cornerstone of U.S. democracy. That longstanding norm began fraying long before the Trump administration, but is now under direct assault. The nation’s elected leaders in the White House and Congress must fully trust that the advice they get from military leaders is not shaded by any partisan bias or ambition. They must also have unshakeable confidence that the military belongs to the nation as a whole — that its sole allegiance is to the U.S. Constitution and not to any political party, group, or candidate. Otherwise, their decisions about when and how to fight the nation’s wars will be irrevocably compromised — which makes it more likely that the United States will enter unnecessary conflicts, waste vast amounts of blood and treasure, and even lose its future wars. Today’s civilian and military leaders must do more to rebuild and reinforce the norms of strict military nonpartisanship in order to ensure that these devastating outcomes never occur.

Note to our readers: Our next column will be our fourth annual summer vacation reading/watching/listening list! Share your favorite national security (very loosely defined) books, videos, podcasts, and miscellany with us at strategicoutpost@gmail.com — and check it out next month to see if your suggestions made the list!