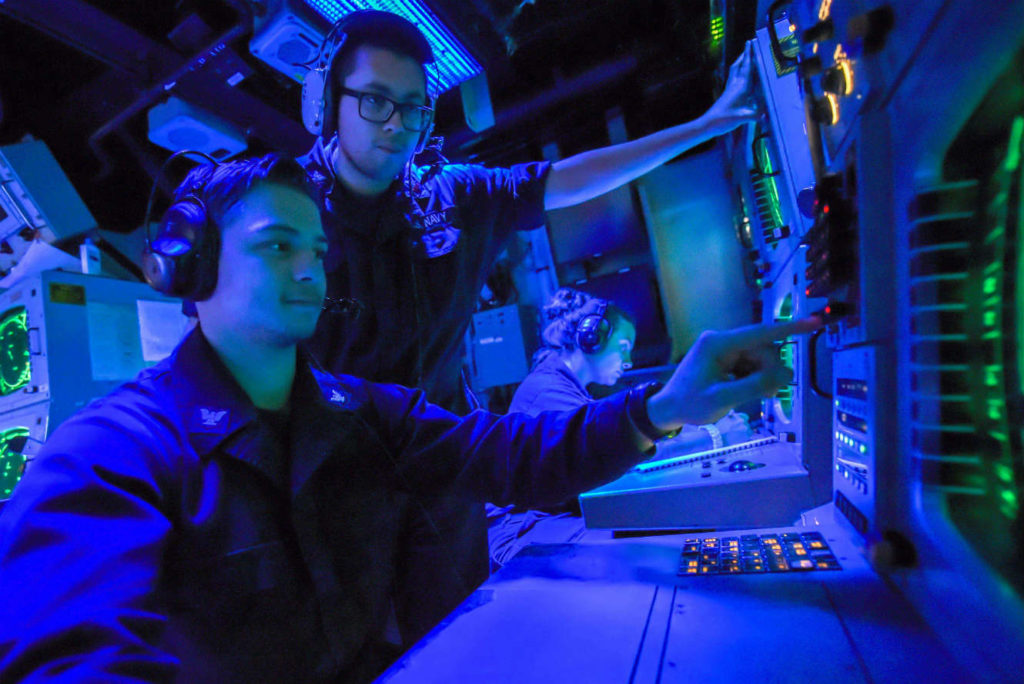 Anti-access and area denial — best known by its shorthand A2/AD — has crossed the buzzword threshold. It’s a quite impressive feat for such a distinctively non-user friendly and technical concept, which alludes to that family of military capabilities used to prevent or constrain the deployment of opposing forces into a given theater of operations and reduce their freedom of maneuver once in a theater. A2/AD’s popularity may well be justified. For all its possible criticisms and shortcomings, the concept can help us better understand the unfolding global competition for military access and movement in an increasingly mature precision-strike context.

The A2/AD shorthand began to gain public traction among U.S. China-watchers less than two decades ago, proving rather handy in capturing Beijing’s efforts to shut the U.S. military out of the Western Pacific area of operations. It soon became a popular concept in East Asia, too, as it turned out to be a recurring hook in conversations about the defense strategies of Japan, Australia, and other U.S. allies in the region.

A2/AD also found its way into strategic debates on the Middle East and Europe. Its ride in Europe has been particularly impressive, having become part of NATO jargon in a relatively short time span. This is hardly surprising. After all, Russian advances in A2/AD seem to challenge NATO’s erstwhile assumption that Moscow could be deterred by a readiness-only approach that ensured allied troops would be in a position to move swiftly from North America and western Europe into the eastern European front. As former NATO Deputy Secretary General Alexander Vershbow put it, any allied aircraft, vessels or troops flowing from west to east would be highly vulnerable to Russian surface-to-air, anti-ship and land-attack missiles. Jānis Garisons, State Secretary of the Latvian Ministry of Defense, joked that in the Baltics, “even housewives were talking about the A2AD challenge in northeastern Europe.”

But what goes around comes around, or so the saying goes. Fame and criticism often go hand in hand and, like most buzzwords, A2/AD has come under intense fire. U.S. Chief of Naval Operations Adm. John Richardson recently argued that the U.S. Navy should stop using the term A2/AD. Richardson criticized A2/AD on three main counts. First, he argued that different theaters present unique challenges and a “one-size-fits-all” concept such as A2/AD creates confusion, rather than clarity. In his view, the U.S. military should move past generic concepts such as A2/AD to instead focus on specific strategies and capabilities relative to specific adversaries within the specific context of geography, concepts, and technologies. Second, Richardson reminded us that there is hardly anything new about A2/AD, as military competition has always been about denying access and movement to potential adversaries. Last but not least, he took issue with the concept of “denial,” arguing that it is too often taken as a fait accompli, when it is actually more accurately an aspiration.

That area denial capabilities represent an aspiration or ideal end-state rather than a fact of life resonates with some of the arguments put forward by Stephen Biddle and Ivan Oelrich in a recent article in International Security. These two scholars set their sights on debunking the widespread assumption that Chinese advances in A2/AD will likely turn the Asia-Pacific into a “no-go zone” for the U.S. military, therefore elevating China to a regional hegemon of sorts. Biddle and Oelrich do acknowledge that A2/AD is giving air and maritime defenders increasing strategic advantages, and it is surely complicating U.S. military access to and movement within China’s immediate vicinity. However, they insist that those advantages are strongest over controlled landmasses and weaken over distance. As a result, as China and the United States (and its allies) deploy countervailing A2/AD capabilities, the current U.S. command of the East Asian commons will give way not to Chinese hegemony, but to a more differentiated pattern of control. This will likely result in a U.S. sphere of influence around allied landmasses, a Chinese sphere of influence over the Chinese mainland, and a contested battlespace covering much of the South and East China Seas, where neither power enjoys wartime freedom of surface or air maneuver.

Most of the points raised by Richardson, Biddle, and Oelrich are valid and could very well help add much-needed perspective into current and future discussions on A2/AD. Yet it remains unclear to what extent some of these criticisms undermine the conceptual utility of A2/AD.

First, the criticism that A2/AD is not a new concept applies to virtually any concept related to warfare, including other buzzwords such as hybrid warfare, information warfare, or disinformation. Hardly any concept in warfare — or even in politics — is completely new. To paraphrase Mark Twain, history rhymes, but it doesn’t quite repeat itself, in the sense that the political, strategic, and technological context in which certain concepts (such as access, “hybrid warfare” or “disinformation”) are used is never the same. For instance, disinformation may well be as old as statecraft itself, but the internet and modern hyper-connectivity qualify and amplify its impact in all sorts of new ways.

Second, there is arguably nothing new about the importance of freedom of (military) access and movement or of denying that freedom to a potential adversary. However, different historical and technological contexts translate into different patterns in the ever-relevant competition for (military) access and movement. For nearly four decades, the de facto monopoly on precision-strike systems of the United States and its allies gave them global freedom of movement and unfettered access to pretty much any theater or region in the world. What is new is that, over the last two decades or so, the proliferation of precision strike might be leveling the military-technological playing field, at least in certain regions. This complicates Western global freedom of military movement and access and could give way to a more contested military-strategic context. In other words: the concept of A2/AD is useful because it helps us understand the patterns of competition for access and area denial in a given historical and technological context, in this case an environment dominated by a maturing precision-strike environment.

Third, it is self-evident that discussions on military-strategic competition should be as detailed and focused on the specific context as possible. It is indeed most important, as Adm. Richardson insists, to move beyond “one-size-fits-all” concepts and focus on how military-strategic competition is affected by context-specific geographical, political, economic and other factors. In this sense, A2/AD surely cannot substitute for a necessary in-depth analysis of specifics. However, as a general concept, A2/AD can help to both capture and convey the idea that we are entering a new military-technological paradigm — one that will affect the nature of the military-strategic competition in virtually every theater, although admittedly in different ways. New paradigms require new ways of thinking, and parsimonious concepts such as A2/AD can help navigate complexity, articulate new strategic narratives, and mobilize resources in their support. There’s something to be said about the sort of parsimony that a concept such as A2/AD brings with it.

Last but not least, observers should consider one other point raised by some A2/AD critics, namely, that we should not be apocalyptic and either say or imply that the advent of A2/AD breeds geopolitical disaster for the United States and its allies. As Adm. Richardson, Biddle, and Oelrich contend, the fact that China is making headway with A2/AD does not mean the U.S. military will be squeezed out of the Western Pacific. A similar logic could be applied to Europe, in that the overall balance in conventional military capabilities between Russia and NATO remains overwhelmingly favorable to the latter and will likely stay that way for some time in spite of Russia’s current modernization efforts. The presence of Russian A2/AD bubbles in eastern Europe might well not be that critical in the event of a total war between NATO and Russia, since the bubbles could conceivably be pierced by allied airpower. Yet NATO cannot afford to be complacent.

Russian A2/AD matters to the extent that it can contribute to fostering the perception within NATO that Russia might enjoy local escalation dominance in parts of NATO’s eastern flank, whether in the Baltics or the Black Sea Basin. This is a question that needs to be probed and examined through the light of different European sub-theaters. No matter the answer, a broader point remains: By raising the military and political costs of a full-scale NATO retaliation, Russian A2/AD capabilities challenge the idea that a “local conflict” (perhaps in the Baltics) would automatically result in a “global conflict” involving Russia and NATO as a whole. Relatedly, the perception that Russia might enjoy local escalation dominance in parts of eastern Europe at the conventional level could serve to undermine political confidence in frontline countries, thus making them more amenable to subtler Russian means of penetration. In other words, Russian work on A2/AD can also be a form of psychological and political warfare.

Insofar as deterrence is ultimately a cost calculation exercise, it can be argued that the emergence of A2/AD capabilities in places such as East Asia, eastern Europe, or the Persian Gulf might not push the United States out of the Eurasian rimland, but it could undermine the credibility and cohesion of U.S.-led alliances and damage deterrence. For all these reasons, A2/AD remains a useful conceptual device for the United States and its regional allies, both militarily and politically.

Luis Simón is Research Professor at the Institute for European Studies (Vrije Universiteit Brussel) and Director of the Brussels office of the Royal Elcano Institute. He has a PhD in International Relations from the University of London (Royal Holloway College).