RT as a Foreign Agent: Political Propaganda in a Globalized World 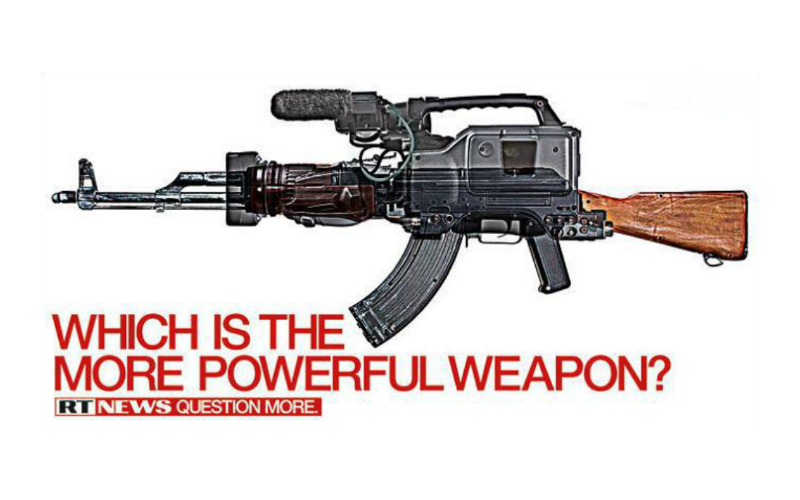 In July 1941, the Nazi news agency Transocean, was convicted for failing to register as an agent of a foreign government. Transocean’s top leadership escaped trial through a diplomatic exchange for two newspapermen jailed in Germany. In unrelated cases, Friedrich Ernst Auhagen and George Sylvester Viereck were charged under the same law, with Auhagen convicted two weeks before Transocean and Viereck the following March. The crime for all of these was not their association with Nazi Germany, or even the political material they were disseminating, but rather their failure to register as paid agents working on behalf of a foreign government, a requirement of the Foreign Agent Registration Act (FARA) of 1938. Had they registered, they likely would have continued with their activities unmolested until Hitler declared war on the United States in the aftermath of Japan’s attack on Pearl Harbor.

Recently, a member of Russia’s Duma suggested that a Kremlin organization operating in the United States be designated as a lobbyist under the same law. Ilya Ponomarev, currently in exile in California due to his opposition to the invasion of Crimea, said that calling RT, formerly known as Russia Today, a news media organization was wrong. “I think it’s a lobbying tool,” he told Buzzfeed, “and it should be regulated as a lobbyist rather than media.”

In response to Ponomarev’s allegations, Edward Delman looked at this idea in The Atlantic. Delman suggested that Voice of America (VOA) and Radio Free Europe/Radio Liberty (RFE/RL) are some kind of analogues to RT. This could not be further from the truth. The only attributes shared by VOA and RFE/RL and RT are government funding and work in the international sphere. VOA and RFE/RL, like their sister networks under the Broadcasting Board of Governors (BBG), which I am a member of, provide a platform for the discussion of multiple points of view. They offer the freedom to speak, to listen, and to know the truth. They empower critical thinkers through news and information programs based on professional journalism and information freedom programs that enable people to capture and share events and what they are thinking. While the BBG is an important part of U.S. foreign policy — working closely with the State Department and other parts of the U.S. government — the journalists and their work are intentionally insulated against political pressures. Think of it like a fire hose: The foreign policy bureaucrats select the audience and the BBG opens the valve to unleash uncensored journalism.

RT was launched as a classic public diplomacy operation in 2005, rather than the vitriolic propaganda outlet that it is today. But it turned out they could not find a large enough audience and, as Russian politics turned back to more brazen autocracy, reverted to Soviet-style propaganda. Except this time, the Kremlin would not be constrained by the Soviet practice of having at least a kernel of truth in their propaganda.

For the most part, there is little real focus at RT on interpreting Russian policies or activities. RT is not about Russia as much as it is about everyone else. Their slogan “Question More” is not about finding answers, but fomenting confusion, chaos, and distrust. They spin up their audience to chase myths, believe in fantasies, and listening to faux — or manufactured when convenient — “experts” until the audience simply tunes out or buys whatever RT serves up. Media illiteracy is the fertile soil on which RT thrives and that it in turn enriches. The differences between the VOA and RFE/RL news organizations and the RT operation are stark.

Ponomarev suggested that in the United States RT “should be regulated as a lobbyist,” but is it a lobbyist? Because FARA applies to the agent and the intent, rather than the specific activity, it does not define the term. So we turn to the Lobbying Disclosure Act of 1995, which defines a lobbyist as a person or organization “who is engaged for pay for the principle purpose” of influencing legislation in Congress. It seems clear that while RT is attempting to influence public opinion in the U.S., it is not actively seeking specific legislative changes, not even regarding the Magnitsky Act. So it seems the label “lobbyist” doesn’t apply.

Is RT a foreign agent? Prior to 1995, a foreign agent was a person or organization working for a foreign government for the “dissemination of political propaganda” and other activities the agent “believes will, or which he intends to, prevail upon, indoctrinate, convert, induce, persuade, or in any other way influence” U.S. foreign policies and domestic affairs. In 1995, this was simplified to influencing the U.S. government or “any section of the public within the United States to affect domestic or foreign policies.” The term “political propaganda” became “informational materials.” These changes, by the way, were Congress’s response to a 1987 Supreme Court decision that upheld the FARA requirement to label three films by the Canadian government (one on nuclear war and two on acid rain) as “political propaganda.”

RT is squarely within the parameters of the definition of a foreign agent — and the intent of the legislation — by distributing informational materials on behalf of a foreign government. This is not about silencing speech. Even the Nazis weren’t convicted on the basis of their message, but the lack of transparency of ownership, direction, and purpose. Call it truth in advertising.

However, the sensible time to register RT as a foreign agent may have passed. The Kremlin propaganda machine would kick into high gear if RT received a notice to register from the Justice Department or an indictment for failing to register, like Transocean in 1941. While the requirement here is simple registration, in Russia, “foreign agent” is invoked to shutdown groups that are not in lock step with the Kremlin’s narratives, regardless of whether or not foreign support is involved. The hypocrisy of the Kremlin’s elimination of outside media from Russia through new ownership laws, intimidating affiliates from rebroadcasting foreign content, and denying access to cable and satellite providers would be lost on RT’s audience, if they heard it at all. These details, and the striking similarities between the Kremlin’s treatment of news media today and the treatment by past fascists, would certainly be ignored by RT and other Kremlin organizations and paid pundits. So, even the label of “foreign agent” is not a shared attribute: While the Kremlin holds VOA, RFE/RL, CNN, Disney, the BBC, and so on as foreign agents, the United States has not reciprocated.

These issues may seem like semantics, but details matter. If we are to respond to the Kremlin’s subversion — and RT is a tool of subversion both in the United States and elsewhere — then we must understand the tactics, the issues, and U.S. policy options. The people of the United States and U.S. companies can demand reciprocity in market access, and highlight Kremlin hypocrisy as the Russians falsely pontificate about this freedom or that. But the U.S. government cannot do much more than demand openness because shutting down RT undermines our high ground of promoting the freedom of speech, not to mention that such a move isn’t — and should not be — legal in America. In the end, it is the responsibility of the private media to seek the truth, debunk the lies, hold the Kremlin accountable for statements and actions, and, equally important, hold all media accountable. There are bigger media ethics stories than the Brian Williams scandal, and this is one of them.

Matt Armstrong is an author and lecturer on public diplomacy and international media. He serves as a Governor on the Broadcasting Board of Governors since August 2013 and chairs a special Board committee examining the purpose and future of VOA. Find him at MountainRunner.us and on Twitter @MountainRunner. The views here are his own and are not an official representation of the BBG.