Making Joint All Domain Command and Control a Reality 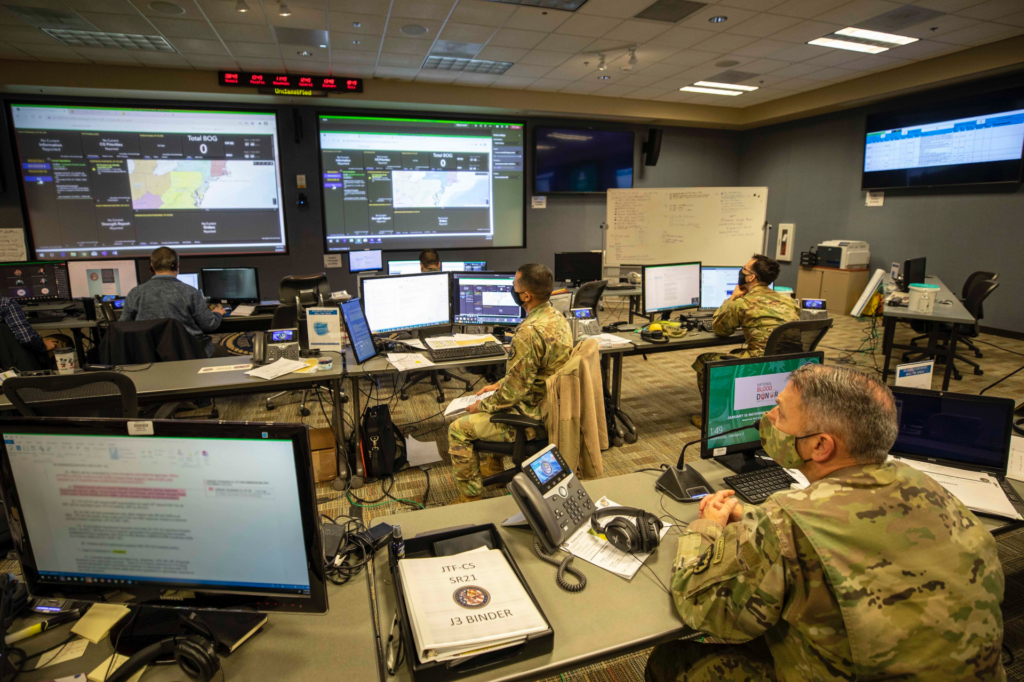 Decision superiority — the ability to assimilate, analyze, and act upon information acquired from the battlespace more rapidly than an adversary — has always been crucial. It enabled the Royal Air Force to defeat a numerically superior German Luftwaffe during the Battle of Britain and it formed the basis for North America’s defenses during the Cold War. Now, in an era where U.S. air combat capacity is dramatically shrinking in the face of a growing Chinese threat, achieving decision superiority is more important than ever. It has also become more challenging. Advances in telecommunications, sensors, processing power, and weapons, along with the growing utility of space as an operational domain, have fundamentally changed the character of effective command and control.

With this in mind, the Department of Defense has sought to achieve decision superiority through a concept known as joint all domain command and control, or JADC2. According to the Department, this concept “is intended to produce the warfighting capability to sense, make sense, and act at all levels and phases of war, across all domains, and with partners, to deliver information advantage at the speed of relevance.” But while this definition captures what JADC2 aims to achieve, it says little about how to achieve it.

As a result, joint all domain command and control has partially stalled due to a cloudy department-wide vision that every service views slightly differently. To make this concept a reality, the Pentagon needs a straightforward, clear, and understandable description of what its vision entails. The focus should be on creating a global targeting system that can enable the find, fix, track, target, engage, and assess functions of the kill chain. Rather than being limited to a single theater of operations, this system should enable the effective completion of a kill chain at any time and any place around the globe. This requires that land, sea, air, and space sensor data be made available, in real-time, to all combatant commanders and their forces. The data should be “tailorable,” allowing individual shooters to take what they need to successfully complete their missions while at the same time allowing combatant commanders and their staffs to gain real-time situational awareness of the unfolding battlespace.

For the Department of Defense, achieving this vision begins with demanding that industry connect every current sensor that can support battlespace awareness, making sensor data available to any potential user, at any level of operation. This data-sharing construct can create “tailored battlespace awareness,” wherein actions in one part of the single, integrated, global battlespace can be understood and inform actions required in other areas of that battlespace. Next, the concept of sensor data sharing should be mandated in every acquisition program from today forward. There are already examples of how industry partners can work together to accomplish this goal. For example, Universal Command and Control Interface and Open Mission Systems standards provide options for integration.

Realizing joint all domain command and control will require more than just installing new telecommunications technologies. It will entail changes across doctrine, organization, training, materiel, leadership and education, personnel, facilities, and policy. Achieving this capability will require first, a vision to ensure that the command and control architectures being developed by the armed services are all aimed toward the common objective of creating a global targeting system, and second, efforts to align the services in working with one another to achieve the desired effects of the JADC2 vision. It also requires the department to prepare current and future battle managers to operate at the scales and timelines required by this global enterprise. Finally, the Department of Defense should also train the shooters of the future to operate in this new construct.

At the macro level, joint all domain command and control involves gathering massive quantities of data through a broad range of distributed sensors and processing it into actionable information. Actors at the strategic, operational, and tactical levels harness germane elements of the resulting information flows to best execute their missions. The entire system is stitched together with a robust set of communication links. This does not mean all actors get all information, for that would leave everyone drowning in data. Instead, it entails allocating the right information to enable actors to achieve enhanced effects in their specific areas of responsibility.

In the past, conventional command and control activities were focused on the highest levels of theater operations. Today, while theater-level command and control will remain significant, space-based sensors, communications, and connectivity enable the creation of a global targeting system. Crucially, this is much more than simply a set of improved intelligence, surveillance, and reconnaissance systems, and labeling it as such may incorrectly assign roles and responsibilities in mission execution. For example, consider the impact that unmanned aerial vehicles like the Predator and Reaper had in the battlespace. These aircraft quickly evolved from intelligence-gathering tools to become sensor-shooters delivering kinetic effects in real-time. But despite this, they remained subject to an intelligence-based tasking process.

The collaborative nature of JADC2 will also require a targeting system that is exceptionally well integrated. Specifically, this means a system that can take a holistic approach to mission execution across all the service components when operating as part of joint task forces in all combatant commands. Maintaining clear lines of authority between strategic, operational, and tactical actors is crucial. The system will break down if senior leaders reach down to the tactical level, as we saw with early drone operations in Kosovo, Afghanistan, and Iraq. Trust needs to exist between the actors involved, further facilitated by an appropriate delegation of authority. Mission Command will be key as well. The networked connectivity of the force should also allow for robust cross-domain collaborative engagement to meet specific effects — in other words, satellites, ships, aircraft, and land forces teaming for a specific moment to yield the desired outcome that none could achieve on their own.

Ultimately, joint all domain command and control will not be an Army, Navy, Air Force, Space Force, or Marine Corps enterprise. But it depends on all of these services organizing, training, and equipping their forces to ensure their particular JADC2 elements work seamlessly with the others in a dynamic, “plug-and-play” fashion. Consider a combined/joint force air component commander — he or she is not interested in what nation or service provides a particular aircraft to the fight, only in the capability that it provides.

Creating this level of interoperability calls for an overarching joint all domain command and control champion with the clout and authority to direct the services and, if necessary, to modify their efforts to ensure integration with the overall enterprise. This past October, the Department of Defense announced the standup of an office to better integrate the multiple service efforts and realize the promises of JADC2. This is an important step necessary to guard against developing service-centric pathways that cannot partner effectively. Time will tell if this office has the power necessary to do so. But the office will be more likely to succeed if it has the authority to drive “system of systems integration” both inside the Department of Defense and across industry. This authority should include real oversight and tasking powers, as well as control over budgets and policy decisions. Additionally, it should have the strong backing and active support of the combatant commanders. They, individually and as a group, should insist on full interoperability for their areas of responsibility.

Command and Control in a New Context

Joint all domain command and control is also being launched in an era of tremendous technological progress that will fundamentally alter how mission effects are secured. Combat aircraft like the F-35 and B-21 are bringing more to the fight than any weapon systems previously fielded with their combined ability to penetrate enemy defenses, gather data, process it, and share it with a range of other actors as necessary.

Understanding the need to disaggregate and distribute command and control in new and unique ways will dictate how future battle managers operate. This may drive different stages of battle management operations. With technology enabling a clearer understanding of the battlespace on a more integrated, global scale, the military should begin to think about battle managers in a new light and perhaps have them embedded in all command and control centers. To support a global targeting system capability the intelligence community may also need to entertain new roles and responsibilities. Specifically, this means giving greater deference to Department of Defense priorities in order to deliver constant and uninterrupted targeting data driven by combatant command mission needs.

Changes in space will also shape the successful realization of joint all domain command and control. A new generation of on-orbit capabilities is now providing broad sensor networks and global communication links that were previously in the realm of science fiction. This is especially applicable for JADC2. Large-scale in-theater command and control centers, as well as legacy command and control platforms like Joint Surveillance Target Attack Radar Systems or Airborne Warning and Control System, and a host of other intelligence, surveillance, and reconnaissance systems, will not survive in a peer combat environment. Fortunately, new space capabilities can compensate for the fact that these legacy aircraft are no longer reliable. But the enemy also understands the value space-based capabilities deliver, which is why it is time to get serious about developing necessary offensive and defensive capabilities on orbit. Otherwise, U.S planners will have traded a set of vulnerable terrestrial systems for an equally vulnerable set of orbital ones.

Finally, it is important for planners to understand that joint all domain command and control is a set of technologies and processes that ultimately empower human decision-making. It cannot be achieved through machines and software alone but will require procedures to make sure information supports human users rather than burdens or overwhelms them. Consider how pilots flying third and fourth generation fighters in the Cold War had to process multiple concurrent conversations on numerous radio frequencies, monitor the radar, listen to missile warning alarms, and manage to fly the aircraft all at the same time. It placed pilots on the very edge of being overwhelmed at any given moment. That is exactly why 5th generation information fusion became a crucial priority. It helped pull the data processing load off the pilot. Machines took over this processing, which allowed pilots to view manageable information feeds and regain valuable thinking capacity.

To be effective, joint all domain command and control should enable decision making — human and machine — at speeds and scales faster and larger than America’s adversaries. Commanders at all levels of operation need to be able to quickly synchronize shared understanding of a single, integrated, global battlespace. As the military teaches its members to operate within this construct, domain-centric thinking will evolve, the speed and quality of operations will improve, and JADC2 will become real.

Once implemented, joint all domain command and control will give combatant commanders and their forces the ability to observe their and others’ areas of responsibility, orient their forces accordingly, and decide what to do based on the real-time data they are getting. Successfully designing, developing, and implementing JADC2 requires a clear vision with an increasing emphasis on cross-service and cross-domain integration. History has repeatedly shown that victory goes to the side with the decision advantage. Given what is at stake, developing and implementing a successful vision for joint all domain command and control is more important than ever.

David A. Deptula is a retired U.S. Air Force Lieutenant General who was the principal attack planner for the Operation Desert Storm and Operation Enduring Freedom air campaigns. He has twice been a joint task force commander. He is the dean of the Mitchell Institute of Aerospace Studies and a senior scholar at the Air Force Academy’s Center for Character and Leadership Development.