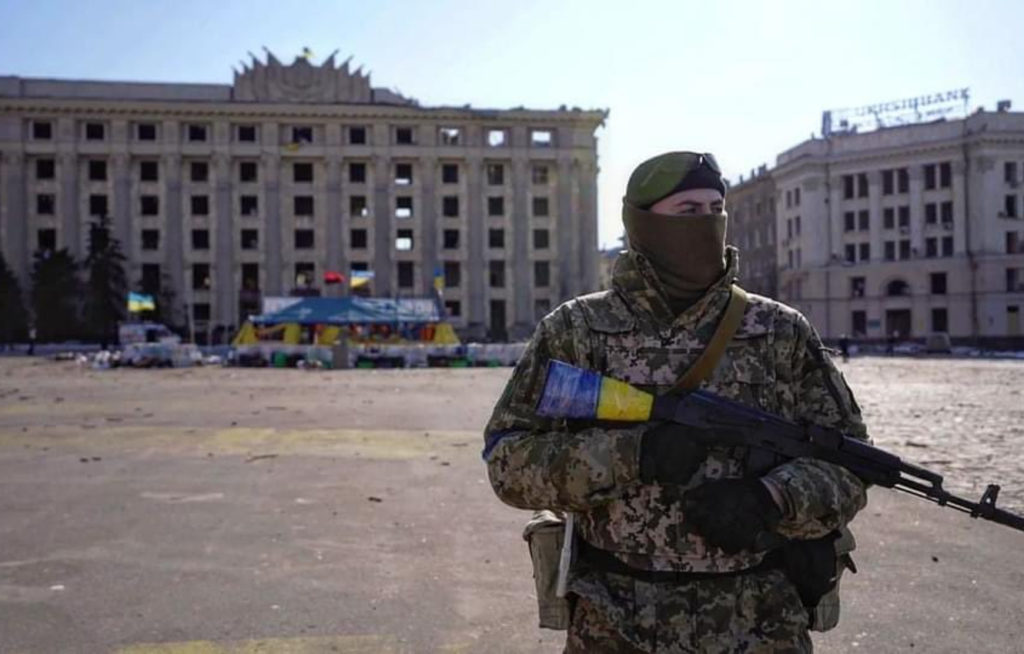 “We will not fight a war against Russia in Ukraine,” U.S. President Joe Biden tweeted earlier this month. Biden was referring to a direct military confrontation between the United States and Russia, and in that regard he has been true to his word. But in another respect his statement obscured an important truth: The United States and its European allies are already in the midst of a full-blown proxy war with Russia.

In the month since Vladimir Putin ordered Russia’s “special military operation” in Ukraine, Western nations have flooded Ukraine with more than 17,000 anti-tank weapons and thousands of anti-aircraft missiles. While imposing punishing sanctions on Russia’s economy, they have pledged billions of dollars in military assistance to Ukraine, including Switchblade drones first fielded in Afghanistan by U.S. special operations forces.

U.S. policymakers have so far wisely refused to transfer fighter jets to Ukraine or impose a no-fly zone to ground Russian warplanes. But alongside weapons intended to kill Russian soldiers and destroy Russian planes, they are reportedly providing reconnaissance data to Ukrainian forces. British Foreign Secretary Liz Truss, meanwhile, has declared that she “absolutely supports” British citizens who want to volunteer to fight in defense of Ukraine. Last week, after Ukrainian President Volodymyr Zelensky addressed a joint session of the U.S. Congress by video, he was greeted by calls of “Slava Ukraini!” — “Glory to Ukraine!”

This is what a proxy war looks like. For now, the mood in Western capitals remains confident and emotionally charged after Russia’s disastrous start to its reckless military campaign. But Western policymakers should not delude themselves about the strategy they are pursuing. Proxy wars — even strategically successful ones — are ugly, violent affairs that incur an inherent risk of escalation. They are rarely as quick or as cheap as they initially seem, and they rarely play out without serious unintended consequences. A proxy war in Ukraine may be unavoidable. It may even be the West’s best option. But policymakers should be clear-eyed about the risks they face.

The Return of Great-Power Proxy Wars

Proxy wars occur when a state attempts to shape the outcome of a conflict in another country by providing material assistance to one or more of the belligerents while limiting its own direct participation in the fighting. States turn to proxy warfare for several reasons. They use proxies because of their perceived military value — superior knowledge of the local terrain or population, for example, or specific tactical and operational capabilities. They use them to minimize costs, measured in blood or treasure, and mitigate risks of escalation. And they use them to avoid political and legal constraints, such as those imposed by war-weary publics and domestic and international law. Proxy wars, in other words, represent an appealing combination of low costs, high benefits, and plausible deniability. As President Dwight D. Eisenhower declared in 1955, proxy wars represent “the cheapest insurance in the world.”

Little wonder, then, that states have often turned to proxy wars to achieve their strategic ends. During the Cold War, the United States supported more than two dozen insurgencies fighting Soviet-backed governments. The Soviets did much the same. China, for its part, backed various rebel groups engaged in “wars of national liberation,” from Guinea-Bissau to Oman to Laos. Since 1945, nearly half of all rebel groups have received support from foreign states, typically in the form of military assistance — there have been over 900 instances of security assistance from third parties to combatants in wars.

And proxy wars are becoming only more frequent: Over the past two centuries, the probability that a group would receive outside assistance has risen from around one-in-five to around four-in-five. Nuclear weapons may make hot conflicts between great powers less appealing, but they do much less to disincentivize less visible and extreme forms of violence. Great-power competition has always gone hand-in-hand with proxy wars of various kinds; there is little reason to expect this time to be any different, although U.S. national strategic documents have tended to downplay this reality. “It is hardly an exaggeration,” writes the political scientist Daniel Byman, “to say that all of today’s major wars are in essence proxy wars.” The war in Ukraine is no exception.

More Expensive Than It Looks

The appeal of proxy warfare is thus not hard to understand. But it comes with inherent limitations. In proxy wars, state sponsors seek to wage war on the cheap. But to reap that benefit, they must sacrifice some control. And this loss of control generates strategic risks. Support from a great-power patron, for example, may embolden proxies to take excessive risks, potentially triggering unwanted escalation — a classic example of bad incentives known as moral hazard. Proxies can use the flow of aid for their own ends, diverting resources to favored constituencies and using troops trained and armed by foreign patrons for unintended purposes. Weapons provided to proxies are difficult to track and easily diverted. Local partners always have their own goals, which may or may not align with those of their Western backers.

At worst, proxy wars can entangle sponsors in wars they were seeking to avoid. In the case of Russia’s invasion of Ukraine, miscalculations may lead to escalation, especially if Ukrainian fighters operate out of external sanctuaries in neighboring countries — Russia has already launched airstrikes against bases in western Ukraine just eleven miles from the border with Poland. For the United States and its allies, waging indirect war against Russia is less risky than initiating direct hostilities, which is what the imposition of a no-fly zone would almost certainly entail. But none of these options are risk-free.

Even if the West avoids getting further entangled in Ukraine and even if Ukrainian forces comply with the West’s preferences, the outlook for a proxy war is grim. Foreign interventions tend to increase the duration of hostilities, as well as the risk of conflicts recurring in the future. Any Ukrainian insurgency in Russian-occupied parts of Ukraine will be violent, protracted, and politically messy. The logic of insurgency tends towards the brutal application of violence. And supporting an insurgency in Ukraine may well entail supporting — indirectly or otherwise — noxious forces within Ukrainian society for the purpose of defending Ukrainian independence. Long insurgencies rarely empower moderates. Any support to the Ukrainian resistance will necessitate ugly tradeoffs and marriages of convenience, and on timescales that many Western governments do not yet seem prepared to seriously contemplate. In other words, a proxy war in Ukraine, even in some of the more optimistic scenarios, will be terrible, above all for the Ukrainians.

But it may still be the best option available. From the moment Putin launched his catastrophic war of choice, the West has had no good options. There is no zero-risk, zero-cost policy on offer. And one of the few options riskier than a proxy war in Ukraine may well be a cheap Russian victory there, which would represent Putin’s fourth successful military adventure in a row. After all, before Russia’s current stumbles in Ukraine, the New York Times declared that “There is no world leader today with a better track record when it comes to using military power” than Putin. The more costly the Ukrainians can make Putin’s invasion, the easier it will be to deter further Russian aggression in Europe and prevent a wider conflagration. And for now at least, Western and Ukrainian interests align in ways that offer an unusual opportunity for efficient aid that can make a real military difference.

As well as deterring Putin from targeting other neighboring countries, the costs imposed on Russia by an ongoing proxy war in Ukraine can demonstrate to Russian elites that Putin’s imperial fantasies are just that — fantasies. The provision of weapons and material support can help to weaken Putin’s domestic base of support, bleed Russia’s military budgets dry, and degrade Moscow’s ability to project power overseas.

Finally, a proxy war strategy in Ukraine can generate leverage at the bargaining table. Sponsoring proxies can often enhance a state’s leverage in negotiations, and by helping Kyiv impose heavier costs on the Russian military, the West is strengthening Zelensky’s hand. The shape of any political settlement between Russia and Ukraine will depend in part on battlefield conditions, and the thousands of Western antitank-weapons and antiaircraft-missiles flowing into Ukraine can help pressure Putin to scale back his political goals and make the necessary concessions; they can help him conclude that the costs of continued fighting outweigh the costs of a diplomatic settlement.

As the Russian invasion of Ukraine grinds on, the West needs to be clear-eyed about the situation it confronts. It is currently waging a proxy war with Russia — one that poses very real risks of escalation. Western policymakers should not deceive themselves about just how ugly proxy wars tend to be. As it continues to back Ukrainian forces, the Biden administration should continue to carefully calibrate its support against the risk of a wider war, especially as arms supply routes become more limited. It should be prepared to rein in the activity of local allies, if necessary. And at some point, its leverage may help bring about a settlement, one that will require bitter compromises but that may be the only way to preserve an independent Ukraine, end the suffering caused by the war, and lower the risk of a wider conflict. Ultimately, the only options worse than a proxy war are a cheap Russian victory in Ukraine — or a direct confrontation between Russia and the United States.

Sam Winter-Levy is a Ph.D. student in politics at Princeton University and the editorial director of the Irregular Warfare Initiative, a joint venture of the Modern War Institute at West Point and the Empirical Studies of Conflict Project.

Image: Ministry of Defense of Ukraine