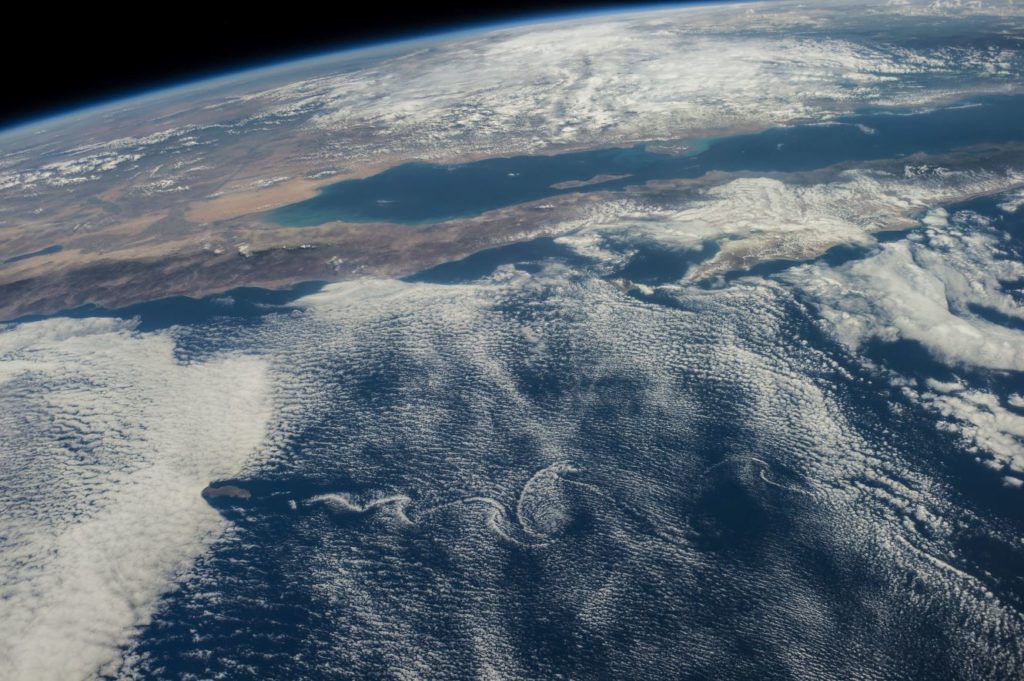 As security threats go, climate change is not the wolf at the door, threatening to blow the house down. Rather, it is thousands of termites whose individual impacts are small and hard to see, but whose collective impact is potentially just as catastrophic. Because of the complex nature of these threats, climate change does not fit neatly into conventional security paradigms for risk mitigation or neutralization. This implies the traditional toolkit for addressing security threats will need to be augmented by a more inclusive approach to conceptualizing national security threats and the agencies tasked with addressing them.

Climate change threatens security through a dizzying array of channels. Climate change will affect access to water, food, and energy — each of which is linked to conflict risk and national security through different channels — as well as patterns and prevalence of infectious disease, the frequency and scale of humanitarian crises, and human migration patterns. In turn, climate change will stress existing institutions for managing transboundary resources, like freshwater and fisheries, and may directly affect conflict risk between states, which itself can precipitate intrastate armed conflict. Climate change will also directly affect economies across the spectrum of levels of development.

This is complicated: The second-order effects of attempts to mitigate climate change will have seismic effects for global energy systems. These effects will have particularly important security implications for major legacy hydrocarbon producers and countries that invested heavily in energy exploration and infrastructure during the 21st-century commodity boom (2002 to 2014). They will also affect countries with large, exportable endowments of “transition metals,” like aluminum, copper, rare earths, lithium, and cobalt, that will underpin transitions to more sustainable energy systems.

Many of these risks are poorly understood for three interrelated reasons. First, there is still fundamental uncertainty about the relative conflict risk associated with climate change. Climate-conflict links may operate through a variety of channels (some of which were enumerated earlier), only some of which have been subjected to rigorous analysis. A recent expert elicitation exercise asked conflict scholars to place climate variability and/or change in context with other well-established risk factors for armed conflict. This exercise (see figure 1) concluded climate variability and/or change was a less important source of conflict risk than other well-documented conflict drivers, like low socioeconomic development, low state capacity, and intergroup (horizontal) inequalities — and that the scientific literature on the subject was characterized by the highest degree of uncertainty. 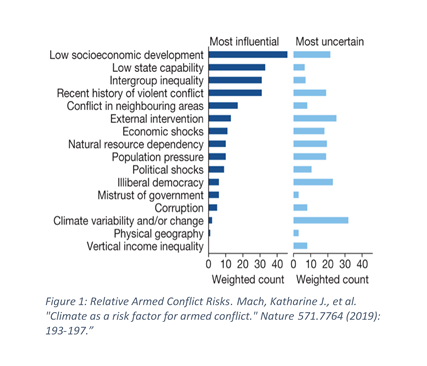 However, the most common characterization of climate-conflict risk in policy discussions is as a “threat multiplier,” exacerbating existing drivers of conflict like poverty, low state capacity, intergroup inequalities, and economic shocks. That is, climate change may exert direct effects on conflict, but likely exerts even larger indirect effects operating through other known drivers.

Second, climate change does not fit neatly into conventional security paradigms for risk mitigation or neutralization. Other emergent threats, like the cyber domain and autonomous weapons systems, complicate conventional practices of deterrence and compellence, but do not necessarily obviate traditional approaches policymakers bring to bear for trying to lessen risk. These other tools (cyber, drones) are typically wielded by state or nonstate actors that can be influenced by traditional measures intended to affect the risk/reward calculation of potential enemies. For example, cyber complicates attribution of attacks, but ultimately the attackers can be identified and punished or deterred from further aggression. You can’t deter a flood or a drought. You might deter actors emboldened by these climate-related events (like Boko Haram, for example). But the events themselves still have direct effects for human security may necessitate militarized response, and can generate “public bads” — like rapid, unforeseen migration, disease outbreaks, or government paralysis — that are independent of the conventional threats posed by nonstate armed groups.

Climate as Cause, but Not the Smoking Gun

Third, the effects of climate change on conflict may be large in the aggregate, but almost never are they the decisive causal factor, which stymies the development of mental models to guide policymakers in crafting responses. Arguing any particular conflict was “caused” by climate change is exceedingly difficult. Multiple motivations are always present among conflict participants, and these motivations are both stated and unstated. Also, contextual factors, like dependence on agriculture for livelihoods, patterns of exclusionary ethnic rule, and low levels of economic development affect whether a given climate “shock” results in violence.

Most research on climatic conditions and conflict finds climate shocks raise the probability of a large-scale event (like conflict onset) occurring relative to some baseline, or increases the frequency with which smaller-scale events (protests, individual battles or skirmishes, cattle raids) occur. That is, climate shocks are probabilistically causal in the sense that they make something more or less likely. They are not deterministically causal in the sense that they are wholly responsible for the outcome. These relationships emerge from the study of hundreds if not thousands (or tens and hundreds of thousands) of cases using quantitative methods, including meta-analyses. That is, the evidence is stronger in the aggregate than as evident in any individual case — thus, pointing to a particular case (like Syria) as emblematic of a “climate conflict” is likely to overestimate the role of climate and underestimate the role of other more contextual factors.

How Should the U.S. Government Respond?

With more conventional security threats, the policy communities responsible for risk mitigation are the national defense, diplomatic, and intelligence establishments. With climate change, risk mitigation will inevitably entail a more inclusive response, wherein the relevant policy actors are drawn from the aforementioned plus development, public health, natural resource management agencies, to say nothing of the involvement of the private sector (particularly with respect to energy systems and creating adaptive technology) and the nongovernmental sector. “Whole of government” language may ring buzzwordy to some, but this does seem to be a situation where the approach is truly necessary. This would include expanding interagency cooperation on security issues to organizations like the National Oceanic and Atmospheric Administration, the Environmental Protection Agency, and the Departments of the Interior and Agriculture, which are responsible for fighting fires on public lands.

Climate change will require a retraining and refocusing of the U.S. military and intelligence community around planning for slow-onset problems: making sure they are just as cognizant of termites as the wolves. And it will require making a national security case for moving ahead with climate change mitigation strategies and reestablishing U.S. leadership in international climate negotiations and environmental governance. This would include recommitting to the Paris Agreement, reinvigorating the Extractive Industries Transparency Initiative, reasserting leadership in the maritime space by ratifying the United National Convention on the Law of the Sea, and dedicating resources to helping developing country partners understand the complex risks associated with climate change.

My argument is not entirely new: Jessica Mathews made it forcefully in 1989, though her case revolved more around demographic trends than climate change per se. More recently, Sharon Burke has tied the demographic argument into the broader case for a climate-sensitive view of security, explicitly focusing on climate-induced migration and its potentially destabilizing effects. These arguments suggest adopting a wider aperture in terms of defining security concerns, but stop short of thinking more practically about what administrative agencies such an approach should require to be at the table.

As if the situation were not already complicated enough, international coordination around these issues is even more challenging. Coordinating policy responses around a clear, well-established target — climate mitigation — has proven vexing, both internationally and domestically. This may be due more to vested interests than the standard collective action problem logic that often underpins global governance failures. Collective action logic may apply more directly to the problems of facing actorless, amorphous threats like climate change. The U.N. Security Council has echoed the U.S. government position regarding climate change as a threat multiplier, but its mandate around authorizing use of force, peacekeeping operations, and sanctions regimes still means its primary toolkit is oriented around actor-driven threats. That will have to change. The task is enormous and enormously complicated — but cannot be avoided.

Cullen Hendrix is professor and director of sustainability initiatives at the Korbel School of International Studies, University of Denver, nonresident senior fellow at the Peterson Institute for International Economics, and senior research advisor at the Center for Climate & Security.

This publication is based on a piece drafted for Perry World House and made possible in part by a grant from the Carnegie Corporation of New York. The views expressed are solely the author’s.