Confusion in the Pivot: The Muddled Shift from Peripheral War to Great Power Competition 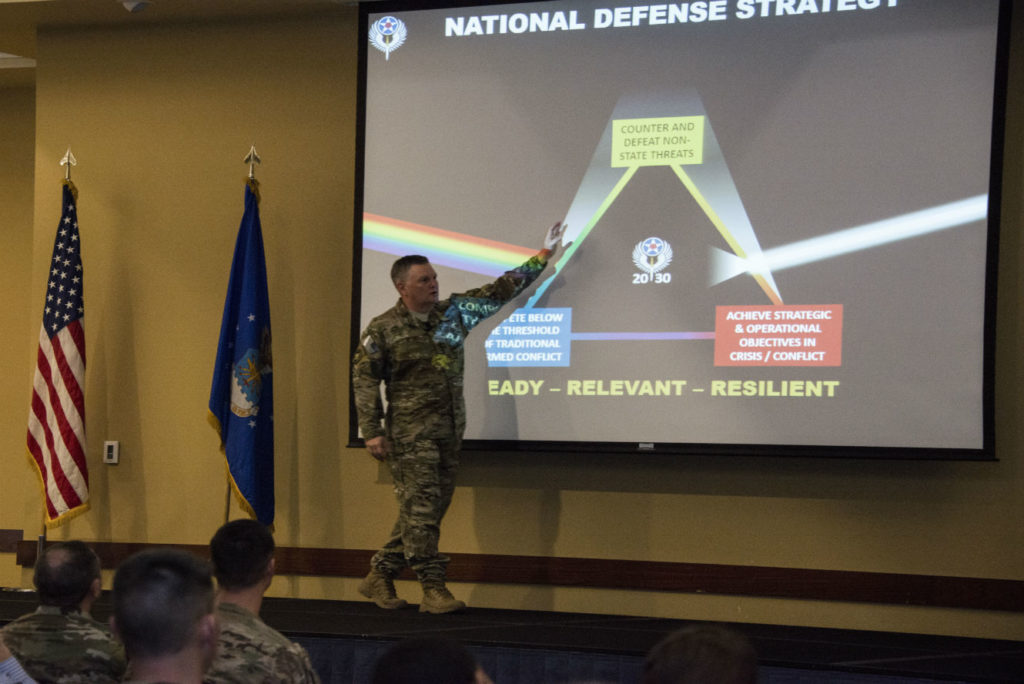 Former Secretary of Defense Jim Mattis explained last January that “great power competition — not terrorism — is now the primary focus of U.S. national security.” Yet less than a year later, when President Donald Trump announced that he would end the U.S. military mission in Syria, Mattis resigned rather than facilitate this drawdown.

While Mattis’ objection was in large part because the withdrawal process seemed to abandon U.S. allies and partners in the region,  the episode highlights a tension underlying the Defense Department’s call for a pivot to great power competition, the underlying focus of the recent National Security Strategy and National Defense Strategy. The Trump administration has called for shifting away from peripheral conflicts to focus on the challenges posed by China and Russia. But as Elbridge Colby, former deputy assistant secretary of defense for strategy and force development and the lead writer of the National Defense Strategy, recently explained in congressional testimony, this pivot “requires a change in the mindset of our defense establishment” that has not yet fully emerged.

The move to refocus defense priorities towards great power rivalry is a welcome one, as the United States has been overly focused on engaging in peripheral wars in Afghanistan, Iraq, Libya, Syria, Yemen, and elsewhere for over 17 years. These missions have taken their toll on preparedness for great power competition, costing an estimated six trillion dollars since 2002, including $45 billion in 2018 for Afghanistan alone. Trump has signaled his skepticism of continuing these wars, and there seems to be a desire to pursue counter-terrorism more narrowly without continuing to engage in stability operations.

But successfully engaging in great power competition will require some difficult choices in defense priorities, as Colby points out and as the National Defense Strategy itself admits. Recognizing these difficulties, the bipartisan Commission on the National Defense Strategy for the United States contends that America’s ability to deter and compete with even one major power is tenuous, a result of budget limitations that are in part due to nearly two decades of military adventurism.  Countering a rising China and a resurgent Russia will require modernizing America’s nuclear posture and naval dominance and building other capabilities and revitalizing the force posture.

The pivot to great power competition cannot simply occur in small steps, but “requires a fundamental shift in the way the Department of Defense conceives of what is required for effective…defense.”

Yet the actions being taken to facilitate this shift are happening out of sequence. Some corners of the military and Defense Department seem inclined to continue some peripheral conflicts and instead of fully embracing the pivot. To try and resolve this discrepancy, the Department of Defense seems to be attempting to continue the current operations abroad by simply reducing the level of focus on stability operations while simultaneously trying to focus more on great power competition. At the same time, some capabilities more suited to Afghanistan-style irregular warfare are actually being built up.

This signals an institutional desire to retain competency in the missions the United States been carrying out since 2001 and a corresponding resistance to undertake the overhaul in mindset that is required to focus on great power competition. Rather than ending the current missions to jump-start that change in thinking, the administration is attempting to muddle through by shifting resources around trying to do both at the same time, thereby harming both future capabilities for great power contingencies as well as the current military missions.

To bring the whole defense enterprise on board with great power competition, the administration should fully end America’s peripheral conflicts and fully invest in preparing for great power competition. Resisting the president’s calls to end the wars by trying to continue these missions with lower budgets is misguided. Simply cutting the resources allocated to those missions will be insufficient to bring them to a satisfying close, while damaging America’s new priorities. Concluding the two-decade focus on the global war on terror is the best way to start unifying the U.S. defense enterprise behind its stated goal of pivoting to great power competition.

Trump’s announcement that he will order the removal of troops from Syria highlighted the tension between the two competing defense frameworks. In theory, the $15.3 billion allocated in the FY2019 budget to overseas contingency operation funding just for Operation Inherent Resolve in Iraq and Syria could be reallocated to cover the modernization capabilities required for enhancing the Air Force’s power projection capabilities — or any other capability more suited to great power competition but currently under-funded. However, the resistance from the Senate, a few in the Pentagon, and some military leaders seems to signal that even though more resources are needed for competition against near-peer rivals, the institutions governing U.S. national security strategy do not want to move on from these peripheral conflicts.

In addition to continued overseas contingency operation funding, in some corners, preparations are being made to actively invest in the missions that the Trump administration supposedly wants to end. Secretary of the Army Mark Esper has suggested that  the Army will not pivot from irregular warfare and stability operations, but rather will shift its focus towards great power competition while also retaining those other competencies. This is consistent with recent decisions to increase the funding for Special Operations Command by $2 billion, create the new security force assistance brigades, and, according to Esper, establish an irregular warfare training center at Ft. Leavenworth. The security force assistant brigades in particular create an odd tension: These new units are being created for the explicit purpose of supporting the Afghanistan mission while Trump is simultaneously advocating for ending the war.

At the same time, in other areas the Trump administration and the relevant agencies have found the ability to cut spending on programs that support peripheral conflicts and the war on terror. This has included the rumored closure of the U.S. Army War College’s Peacekeeping and Stability Operations Institute and the reduction of troops deployed in African stability operations by over 10 percent. Outside of the Defense Department, the administration has also targeted cuts to the budgets of the institutions that support current stability operations, like the United States Institute of Peace and the U.S. Agency for International Development. While these cuts are generally consistent with an effort to bring the wars in the Middle East and South Asia to an end, they only make sense if the relevant operations have ended — and if they are consistent with funding decisions being made in the rest of the national security enterprise. Ultimately, without a broader decision to end U.S. military involvement in Afghanistan and other peripheral conflicts, these cuts do little to further the new framework of great power competition. Ultimately, U.S. troops are still being asked to do these missions without the full support of the institutions and organizations they rely on to complete them.

Thus, the budget is seeking to procure capabilities for future power projection while simultaneously justifying over $64 billion in total overseas contingency operation funding, among other expenditures, to maintain meager gains in the Middle East and Afghanistan. And as Eric Sayers recently discussed in War on the Rocks, these missions continue to get pricey outlays while the Defense Department has been resistant to actually allocate the funding required to meet the needs of crucial programs desired by Indo-Pacific command that they identify as crucial to combatting growing Chinese threats and influence in an era of great power competition.

Hence, the eagerness by some drafters of the National Defense Strategy to remove funding for America’s enduring peripheral conflict clashes with a resistance in other parts of the organization to end these missions. The result is an inability to fully commit to the culture change needed for a robust overhaul of American defense priorities away from the post-9/11 war on terror. It appears there is still a desire for the military to both do great power competition and maintain capacity for stability operations in Afghanistan and elsewhere. Trying to focus on both sets of missions will hamper the preparedness and ability to do either.

Admittedly, it is difficult for large organizations to shift their priorities quickly, especially when dealing with legacy budgets, equipment, and attitudes. However, while we should expect to see some friction during this pivot, the evidence points potentially to deeper internal tensions over funding priorities. The simultaneous desire — expressed through budgeting decisions — to continue the missions of the past two decades while also shifting to a new national security strategy indicates a lack of cohesion in the organization rather than mere growing pains.

It is time to capitalize on this moment to end the peripheral wars and kick-start the shift in mindset that will be required to move the defense establishment more fully in the direction of great power competition. To be fair, tough choices about how to end these wars and how to support U.S. partners while doing so still need to be made, but this should be done in the context of thinking about great power competition rather than simply seeking stability in regions that do not impact core American interests. Thus, instead of trying to pivot to great power competition while continuing to engage in peripheral conflicts simultaneously, implementing this paradigm change should entail ending the war in Afghanistan and other stability operations first. Once there is across-the-board commitment to ending these conflicts, it will be easier for the entire organization to focus on the new priorities.

Simply reshuffling the modest budget allocations for supporting stability operations is insufficient. The billions being spent on overseas contingency operation funding would be better spent on force modernization and training for future contingencies. In clinging to the wars of the past two decades, the Department of Defense and the Trump administration are simply taking resources away from the troops’ mission while undermining the coming shift. A complete change in mindset — and, correspondingly, in budgets — is the only way to effectively prepare for great power competition. The institutions of U.S. national security should seek out a unified commitment to determining what missions are in the U.S. national interest and worth pursuing in the context of preparing for great power competition.

Benjamin Denison is a postdoctoral fellow in U.S. foreign policy and international security at Dartmouth College’s Dickey Center for International Understanding. He received his Ph.D. in political science from the University of Notre Dame.