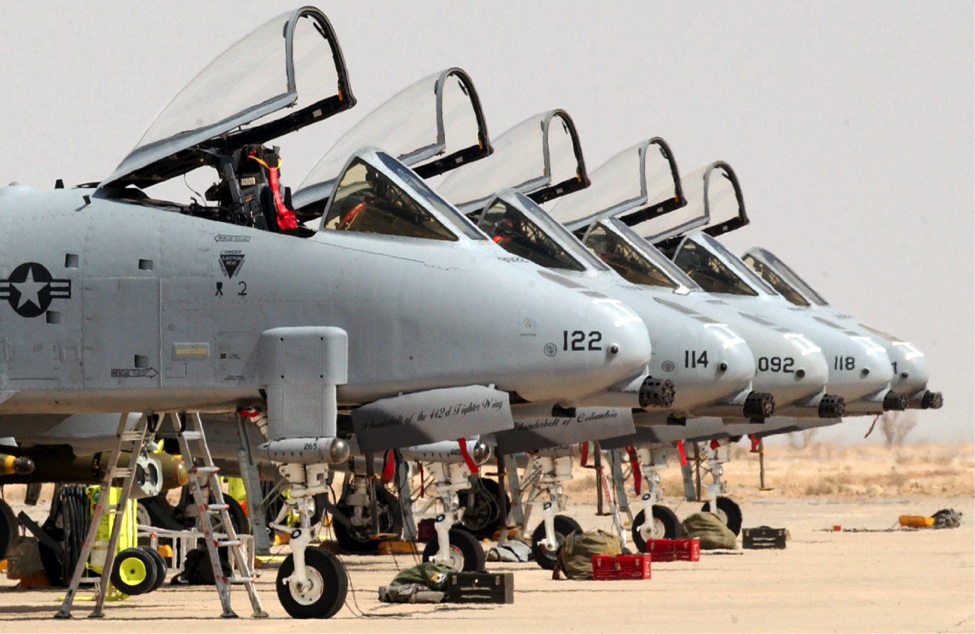 Air Force pilot retention has plummeted to 35 percent — 1,363 pilots have left in the past 24 months. A news headline reads: “Military hopes to curb exodus of discontent pilots.” The Senate is resistant to raising the pilot bonus. Air Force officials are feverishly working to rebuild trust in the ranks by addressing quality-of-life issues left unattended. Pilots are voting with their feet and the airlines are hiring. One non-traditional solution being panned is Phoenix Aviator. In lieu of a traditional bonus, pilots who agree to stay would be eligible for a $100,000 bonus upon separation. In return, they would receive an airline transport rating and the airlines would grant preferential treatment to military pilots who have served at least 15 years. The airlines are supportive. Sen. John McCain is not, remarking, “I’d be more interested in raising the aviation bonus and giving pilots a better lifestyle.”

The current military pilot retention crisis is not the first, and it won’t be the last. In fact, this is the fifth pilot exodus since the Vietnam War. But today is not yesterday. If things don’t change, the U.S. military is set to endure the longest and largest pilot exodus in history. The signs are already there — the Air Force has failed to meet its annual pilot retention goal for the past four years and pilot retention has been trending downward since 2010, according to the internal data from the U.S. Air Force Aircrew Crisis Task Force. The first installment in this three-part series will explain how the retention crisis hurts the day-to-day operations of a squadron and detail why retention is the key to preserving combat capability in the near term.

Previous pilot manning crises occurred in the early 1970s, late 1970s, early 1990s, and late 1990s. These were fueled by the hollowing of the force, high operations tempo, erosion of compensation, and lucrative private-sector opportunities. The current retention crisis is strikingly similar, except for two big differences.

First, the airlines are hiring in higher numbers than at any time in the past. In the next ten years, 42 percent of commercial airline pilots will hit mandatory retirement age. The industry anticipates hiring 5,000 pilots per year for the next 20 years. By comparison, the entire U.S. military only produces 2,500 pilots per year. But while retention is always influenced by airline hiring to an extent, solely blaming the airlines for military pilot retention woes is like saying someone jumped off the Titanic because there was a lifeboat in the water. The tragic fate of the Titanic was sealed not by the iceberg, but by the ship’s design combined with operating missteps.

Second, previous pilot shortages were partially mitigated by the downsizing of the Air Force as a whole during the same periods. Today’s Air Force does not have that luxury, because it can’t get any smaller. Twenty years of force drawdowns have now reduced the capacity to produce, absorb, and develop aviators. Today’s Air Force is worn out, too small, under-resourced, and over-tasked thanks to the three-punch combo of 27 years of continuous combat rotations (and counting), years of budget turmoil, and over-shooting massive force draw-downs.

Incidentally, 2010 was also the last time Congress passed a defense funding bill on time. This preceded the Budget Control Act of 2011, followed shortly thereafter by sequestration in 2013 — causing massive groundings of flying squadrons.

In 2010 Congress did something else that exacerbated the retention problem: It passed a law that raised the airline pilot training requirements from 250 hours to 1,500 hours. This took effect in 2013. Effectively, this made the cost of becoming an airline pilot comparable to that of attending Harvard — leaving military pilots as the primary talent pool. This is the perfect storm for what is likely to be the longest and most severe military pilot shortage in history.

Why Does Retention Matter?

Pilot manning consists of seven elements. They are:

Collectively, these provide the right number of pilots, with the right qualifications and experience to fill cockpits and associated staff jobs that require an aviation background. Years of manning and investment cuts have made these elements out of balance with one another, like a game of Jenga. Thus, when retention drops there is nothing the other pillars of the system can do to compensate for it.

Rightfully, the Air Force’s long-term solution is to grow pilot production and address maintenance manning issues to rebuild this system. However, it will take upwards of a decade of investments before these bear fruit. For maintaining combat readiness right now, the most critical element is retention.

It seems obvious that when retention falls, experience leaves the service. Less obvious is the effect — the unit becomes unbalanced, even if it is fully manned on paper and reports high readiness. The flying/readiness model Air Force fighter squadrons use is optimized when 60 percent of the squadron is experienced. As this percentage falls, fewer flight leads and instructors are left to season and qualify a growing pool of inexperienced wingmen and co-pilots. Thus, the senior pilots fly excessively, using hours that were originally intended for young pilots — who sit idly by waiting to be paired with the increasingly rare flight lead or instructor. This is the exact opposite of the readiness requirements dictated by the Air Force where wingmen fly more, and the experienced pilots fly less. The lack of balance slows the path for young pilots to gain necessary qualifications. To counter this, squadrons operate in an arduous upgrade training cycle of young pilots — on the backs of the experienced aviators.

Right now, less than half of all active duty fighter squadrons have a healthy experience ratio, according to the task force. Instead of evolving tactics and honing skills to win wars, they are relegated to treading water trying to produce enough qualified pilots just to get to the war. With each additional pilot who leaves, the quality of life and quality of service of the remaining instructors and flight leads gets worse as they struggle harder to maintain the combat readiness of their unit. I personally know an instructor in a front-line fighter squadron whose unit had so many inexperienced aviators that he personally wrote 150 grade sheets during the course of 126 sorties in 2017. This is not a training unit — it’s an overseas combat fighter squadron. And this is not an anomaly.

Over the course of their ten-year pilot training commitment, this vicious cycle erodes morale and strains families in the years leading up to the point when pilots decide whether they will continue flying in the military. Beyond the human element of maintaining combat readiness amid unbalanced levels of experience, this also creates fiscal inefficiencies.

If a squadron’s experience level drops just 10 percent, the unit’s flying program loses upwards of 15 percent of its efficiency — that is, the way it apportions flight hours between experienced and unexperienced pilots. This may not sound like much, but it adds up. A single active duty fighter squadron needs to fly roughly 300 sorties a month to reach its minimum readiness requirements. Assuming each sortie lasts 1.5 hours and using an open-source estimate of the cost per flying hour of an F-16 ($8,200), in a year $6.6 million in operating costs are used in a manner which they were not designed nor appropriated. This is a single fighter squadron — the Air Force has 55 fighter squadrons.

Some of these problems are mitigated by continual rotations to the Middle East, where operations require longer missions, which help young pilots gain experience faster. But that experience doesn’t fully translate to being prepared for a major theater war with adversaries that shoot back at you. Moreover, the limited scope of current Middle East operations atrophies other critical high-end skills that pilots are also required to maintain (something a light attack program would solve). Finally, depending on perpetual war as a seasoning ground for pilots is irresponsible at best.

Historically, when a pilot shortage persists for several years, leadership has surged the pilot training pipeline. This solution is based on the flawed belief that there is never a shortage of people wanting to become pilots, and if the Air Force could only produce more of them quicker it would solve everything. Wrong. As the retention crisis persists, operational squadrons become congested with wingmen without flight leads or aircraft commanders. That means surging pilot production creates an influx of newly minted pilots with no cockpits to go to. The formal training units where new pilots learn to fly their combat aircraft have been at peak capacity with little room to grow, since it would take aircraft from front-line units to do so.

During the last crisis, this became known as “the Pope syndrome.” Named after A-10 units at Pope Air Force Base, squadrons received so many wingmen it caused many pilots to lose their combat readiness status. In 1999, one of the most egregious years, the Air Force produced 142 percent of the A-10 fleet absorption capacity.

At other times, the workarounds to find cockpits for new pilots have been creative. In the 1980s, Project Season sent new active duty pilots to fly with the Air National Guard, where units have more experienced aviators and the capacity to absorb young pilots. Today this is done with active associations, and the Air Force plans on increasing these associations in the fighter community in the near future.

Another effort was the Career Trainer initiative, a program that removed the requirement for a pilot to even go to an operational cockpit. First assignment instructor pilots could apply to stay in pilot training units indefinitely, which had two benefits. The pilot training instructor would not have to be retrained in an operational unit, removing the training burden for front-line squadrons. It also meant he/she wouldn’t need to be back-filled by taking an experienced pilot off the front lines to teach pilots how to fly.

This year a handful of young F-16 pilots will be sent to fly F-35s with the Marine Corps so they can become absorbed and clear the way for more F-16 pilots behind them, according to the Aircrew Crisis Task Force. In addition, some new fighter pilots will be sent to fly Navy EA-18 Growlers for their first assignment. As with all compromises, solving a problem today may create a larger problem tomorrow. But right now, these are the best of the bad choices.

A Call to Listen

The economy did not create this problem, leadership did. And leadership is what will solve this problem — Congressional leadership, senior military leadership, and squadron leadership. Despite labeling the pilot shortfall a crisis, leadership at all levels has been slow — and arguably unresponsive — to address the conditions that have created this. As Secretary of the Air Force Heather Wilson has said, “It is not fair for this nation to ask our commanders to keep saying ‘We got this’ right up to the point of failure, because we don’t got this.”

There is no shortage of ideas to address pilot retention. Unfortunately, many of the proposals fail to fully comprehend the conditions that eroded pilot retention in the first place. Thus, these end up being solutions in search of a problem. The next installment will detail how years of choices and strategic trades have affected the present crisis.

Mike Benitez is an F-15E Strike Eagle Weapons Systems Officer in the U.S. Air Force. The views expressed are those of the author and do not reflect the official policy or position of the Department of Defense or the U.S. government.