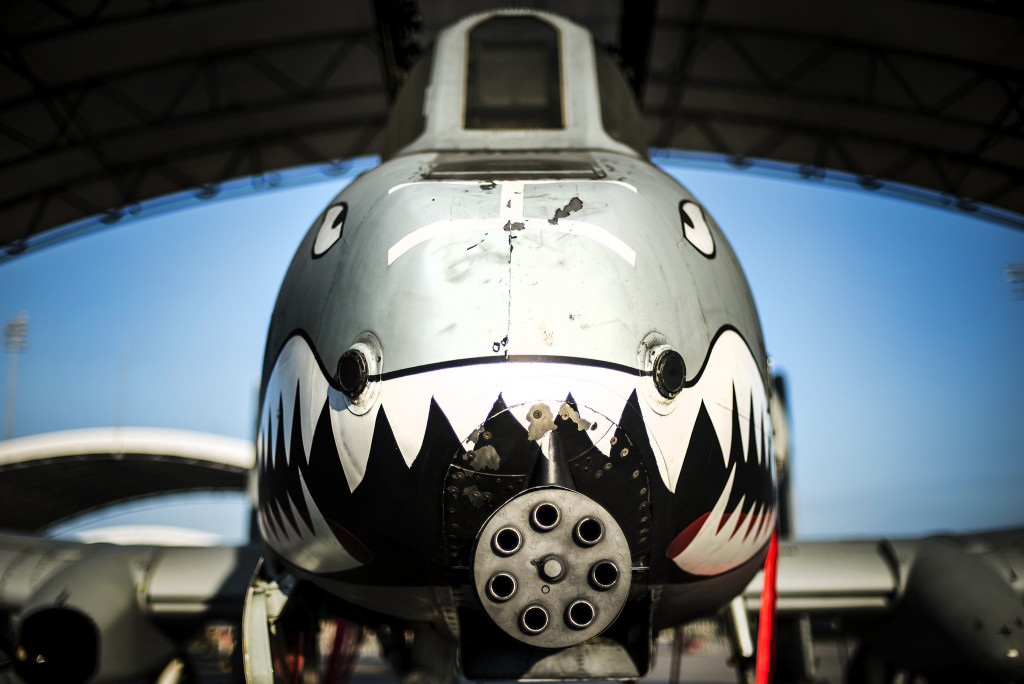 Bullets pelt the armored plating of the Mine-Resistant Ambush Protected (MRAP) vehicle as insurgents surround the small convoy. A rocket-propelled grenade ravages the lead vehicle, forcing the occupants to dive for cover from the flames and shrapnel. The convoy is outgunned and outnumbered by the well-coordinated insurgent attack. The Joint Terminal Attack Controller is unavailable and no one can precisely locate the enemy. Fast moving fighters soar past but cannot identify enemy targets. So the pilots come low into the valley to provide a show of force until a lucky burst from an insurgent machinegun hits a wing and causes the fighter pilot to crash. A more proficient pilot might have coaxed the damaged plane home but reduced flight hours have reduced pilot proficiency overall and especially on Close Air Support (CAS) — a second priority. The bombers fly circles overhead with 40,000 pounds of bombs hoping someone will provide the enemy’s location before they get danger close to the MRAP. Unfortunately, coordinates never arrive and the enemy kills half the convoy and spirits equipment and prisoners into caves, securing a great propaganda victory.

The above vignette is more true to a likely combat scenario than the one that opened a recent War on the Rocks article by Derek O’Malley and Andrew Hill on the future of close air support (CAS). Air Force fighters and bombers provided great support to ground forces in their vignette. Unfortunately, there are many situations where only purpose-built CAS aircraft have the capabilities necessary to meet the needs of ground forces that they accurately describe. More importantly, O’Malley and Hill make erroneous and dangerous assumptions about future warfare, miss the key future procurement issue, and fail to address the substantive arguments for a dedicated CAS plane that can save billions.

Most importantly, O’Malley and Hill overestimate the ability of technology to make U.S. forces “nearly impossible to ambush” due to an exceedingly high “degree of situational awareness” from “dozens of land and sea-based unmanned air and ground surveillance assets” with “automated processing and exploitation algorithms.” This idea defies historical precedent and the interactive nature of war. As LTG H.R. McMaster said, in the past we have assumed “advances in … technology, … automated decision-making tools, and so on were going to make war … efficient, and relatively risk free — that technology would lift the fog of war … But that’s not true, of course.”

During my time playing a small role supporting numerous combat missions, I routinely saw the enemy adapt to and evade high-tech intelligence efforts with low-tech solutions — we improved, they improved in a continuous cycle. When we find an adversary who wants to lose, he might allow us the situational awareness described in O’Malley and Hill’s fictional story. However, at that point there will be no need for human soldiers or the staff supporting them. Without the fantastic automation described in the fictional story, a lone F-35 pilot cannot simultaneously fly and direct unmanned aircraft systems (UAS) with any precision. The fog of war will continue no matter how many unmanned surveillance assets flood an area because war is an interactive enterprise and the enemy adapts.

The authors’ second crucial mistake is failing to appreciate future requirements to frequently operate in low air threat environments, preferring to focus solely on a future “that features widespread surface and air threats.” The United States must prepare for the proliferation of air threats and high-end threats. However, the threat from most enemies and near-peer competitors is dramatically different; most U.S. military operations will likely continue occuring on the “low-end” against adversaries with limited, or at least inexpensive, anti-air capabilities for many years to come at a minimum. Surface-to-air missile proliferation is a problem and generally poses a greater threat to slow aircraft lacking stealth. However, more advanced aircraft lack immunity, especially when there are flight ristrictions, as demonstrated by a Serbian anti-aircraft missile battery’s ability to shoot down a stealth F-117 fighter in 1999. Furthermore countries like China are working hard to defeat U.S. stealth technology.

Admittedly, low-end threats should be the Air Force’s second priority despite their greater frequency today, which will likely continue in the future. However, using expensive aircraft for low-end missions will quickly consume Air Force spending, and forces changes to ground operations. I have watched commanders change plans based on aircraft availability and know of others who have canceled dangerous missions because the only available aircraft were not CAS-specific. With the right tactics, fighters and bombers can provide CAS, but they do not do it as well. Similarly, “legacy” attack aircraft, like the A-10, can fight in a high air threat environment but at a higher risk that good tactics (e.g. pairing with fighter cover) can reduce but not eliminate. While legacy Air Force aircraft may sustain casualties, their casualty rates will likely remain lower than the more vulnerable Army and Marine Corps attack helicopters operating in the same environment. While unfortunate, the sacrifices of brave CAS pilots (helicopter and plane) will save lives on the ground and increase the potential for battlefield success.

Due to physics, the ideal characteristics making a plane, manned or unmanned, effective at CAS generally detract from its ability to excel in air-to-air combat. Key characteristics ideal for CAS include efficient fuel use (loiter time), low and slow flying (target discrimination and acquisition), and rough landing strip capability (close to the fight). These characteristics generally lead to greater wing area and weight. Response time is also important and more congruent with air superiority requirements but less important than the ability to distinguish friend from foe and precise targeting. The Air Force needs more specialized planes (manned or unmanned) to increase capabilities while reducing costs; mediocre “multi-role” fighters create excessive costs.

Air Force pilots realize the greater capabilities of the A-10 for CAS and F-22 for air superiority missions but incorrectly assume the F-35 saves the Air Force money. Operating a fleet of 881 A-10s and 881 F-22s instead of 1,762 F-35As could save the Air Force $1 to $9 billion annually in operating costs, which would quickly make up for the $4-5 billion saved by the A-10’s retirement. The great variation depends on actual flight hours and how far F-35 operating costs can drop. If the F-35’s operational cost trajectory mirrors the F-22’s the drop may be negative; Congress expected the F-22’s 2008 cost of $44,000 per flight hour to decline dramatically but the cost rose to $53,084 in 2014. Buying a mixed F-22 and A-10 fleet might also cost less than an F-35 fleet. At worst, the A-10/F-22 fleet would be slightly more expensive but possess greater capabilities and lower operating costs.

I am not arguing to end the F-35 to obtain these savings, which cannot be fully realized due to past decisions including but not limited to existing F-35 purchases and purchase committments — cancellations incur substantial penalties. However, the dramatic operating cost differences suggest a broad problem with advanced “multi-role” fighter procurement and show why the Air Force’s cost argument to retire the A-10 without a low-cost (compared to the F-35 and F-22) CAS platform defies logic. CAS aircraft that are relatively cheap to operate would allow the Air Force to spend less money on the more common day-to-day missions in low air threat environments, while spending more on expensive stealth fighters (e.g. F-22/F-35) and other technologies (e.g. drones or 6th generation planes) for the rare but must-win fight in a contested air environment.

CAS is a mission, not a plane, and the emotions that plague the A-10 retirement debate fail to address substantive arguments against the decision. However, O’Malley and Hill use my article as evidence of criticism that exists “despite fiscal incentives” without ever addressing the fiscal analysis I provided (oriented on comparing A-10 operating costs to other current Air Force platforms). The debate remains emotional because most ground troops, like myself, fail to understand how the Air Force can claim to provide the same level of support with more expensive aircraft lacking similar capabilities. Ground troops generally believe only a purpose-built CAS aircraft with full-time CAS pilots can correct erroneous requests from troops under fire, identify changes to ground maneuver without notification, or carry sufficient ammunition to provide repeated “gun runs” when the enemy “hugs” friendly units in an effort to evade bombing. If Hill and O’Malley want to “weigh the evidence” and elevate the debate, they should evaluate alternative ways to save taxpayers billions by either using A-10s instead of more expensive planes or retiring any of the other four legacy Air Force fighters and bombers with overlapping capabilities. These other legacy aircraft cost more than A-10s and would suffer similar problems against a significant anti-air threat. Admittedly, using A-10s more will reduce taxpayer expenditures, not Air Force budgets, because overseas contingency operations funds combat operations.

If the A-10 decision is about saving money, the Air Force should explain why it is retiring the least expensive and most capable CAS aircraft without a similarly low-cost manned or unmanned replacement. The rationale for zero CAS-specific platforms but two multi-role planes (F-16 and F-35), two air superiority planes (F-15 and F-22), and three to four bombers (B-1, B-2, B-52, B-X) seems specious at best. As a CAS customer, it appears the Air Force should focus on developing cost-effective ways to streamline its aircraft portfolio and procurement process to maximize Air Force capabilities across mission sets instead of duplicating the products it prefers to produce. The Air Force must eliminate a plane due to budget constraints, but eliminating the cheapest plane with the greatest capability for the most common aerial combat mission remains the worst way to choose a plane for retirement.

Elevating the debate requires using evidence, not mistaken assumptions about future warfare in a gripping story. The Air Force appears trapped defending past decisions instead of weighing the evidence and listening to the advice of the Air Force’s CAS experts — Joint Terminal Attack Controllers. All airmen, from the newest graduate from Air Force Basic Training to the Air Force chief of staff, want to win wars and protect ground troops; however, succeeding in this task requires understanding the interactive nature of war and efficiently managing a tight budget by making wise fiscal decisions for operations and procurement. Past procurement decisions represent sunk costs the Air Force should continue ignoring; however, the Air Force should learn from those mistakes and make future operational and procurement decisions with a more realistic view of future threats and costs.

Major Benjamin Fernandes, U.S. Army, is a Council on Foreign Relations Term Member and PhD student at George Mason University. His studies focus on security assistance, principal-agent theory, and grand strategy. He is currently assigned to U.S. Army Training and Doctrine Command (TRADOC). The conclusions and opinions expressed are his own and do not reflect the official position of the U.S. government, U.S. Army, or TRADOC.