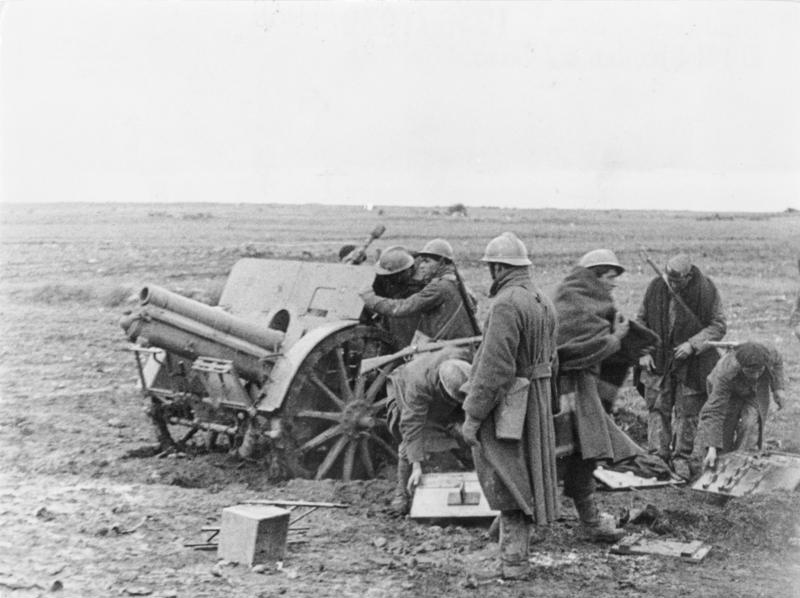 The debate over whether or not to arm Ukraine is alive and well. While President Barack Obama continues to weigh his options, prominent experts have called for $3 billion in lethal aid to the Ukrainian government; a group of bipartisan House leaders are calling for the United States to arm Ukraine; and the Chairman of the Joint Chiefs of Staff Martin Dempsey believes it is time to “absolutely consider” giving weapons to Kiev. We have seen this story before. During the Spanish Civil War, President Franklin D. Roosevelt toiled over whether to send weapons to the Spanish Republic as it fought Generalissimo Francisco Franco and his forces. This is, of course, not a neat parallel with the situation today. But it does echo the same debates and provides three insights on arming favored forces and one grander insight on strategy.

In 1939, U.S. Ambassador to Spain Claude G. Bowers went to meet with FDR to discuss the conclusion of the Spanish Civil War. Bowers had openly rejected the “scandal” of America’s non-intervention policy—the decision to forego military intervention or send weapons to the Spanish government. He claimed it was responsible “for the prolongation of the war” and that the policy was “caked with…the blood of women and children.” As Roosevelt saw Bowers enter the room, he hastily offered his personal assessment of U.S. policy toward war-time Spain: “We have made a mistake. You have been right all along.” How did FDR come to this conclusion?

The Spanish Civil War, which raged from 1936 to 1939, left the Roosevelt administration with a daunting task. On one hand, they could authorize arms shipments to aid the democratically elected Spanish government, but risk entangling the United States in a wider European war while simultaneously breaking a Non-Intervention Committee agreement with powers such as Great Britain and France. On the other, it could abide by the Committee’s goal—to keep the great powers out of another great war—and allow Franco’s better-equipped Nationalist forces to steamroll over the Republic, thus providing a victory to fascism. FDR and his team, especially Secretary of State Cordell Hull, chose the latter option so the United States could stay out of the fight.

Why did the Roosevelt administration choose this course of inaction? The first set of rationales was political. American Catholics supported Franco’s cause in Spain against what was perceived as a Communist-run Republican government. Catholics were a vital constituency in FDR’s New Deal coalition, and angering them would mean losing many votes in the November 1936 elections. Further, some members of FDR’s administration were wary of the possible Communist influence within the Spanish government, and looked to ensure Washington wouldn’t help Madrid. “We shall be in an embarrassing situation,” worried Under Secretary of State William Phillips, “since we have no legislation authorizing us to refuse the export of such materials…for what amounts to a communistic government.”

There was also the issue of an isolationist movement in the United States, best seen in the Congress. Not far removed from the brutal memory of World War I, many in Washington were elated that FDR and the State Department acted to keep American treasure, weaponry, and troops at home. And while there was a small internationalist contingent, it was easily drowned out by the isolationist crowd. To keep Congress and other domestic constituencies happy, the Roosevelt administration decided not to send weapons and distance itself from the conflict. That decision, as Hull explains, was a political masterstroke: “our position seemed acceptable to both the apparently irreconcilable isolationists and internationalists. Isolationists approved because we were keeping aloof from the conflict. Internationalists approved because we were cooperating with Britain and France.”

The other considerations were, of course, military. First, the United States feared making the situation worse. The FDR administration was well aware that Germans and Italians were helping Franco’s Nationalists and blatantly ignoring the Non-Intervention Committee. But FDR and Hull felt that America’s involvement in the war would only exacerbate the chances of a wider European conflict. FDR’s foreign counterparts agreed on this point. French Premier León Blum was candid: “Call non-intervention a lie, a fiction if you like, but the fact remains: it has helped to stop a general war.” Even Winston Churchill, who at the time was in the opposition party of the British government, mused that “the Nonintervention Committee is full of swindles and cheats…but it is a precious thing in these times of peril that five great nations should be slanging each other round a table instead of blasting and bombing each other in a horrible war.”

FDR had other worries. Although he wanted to help the Spanish government, he and Hull felt that any weapons shipped over to Spain would only end up in Franco’s hands because his forces had complete control of the seas and much of the battle space. Further, Franco was getting immense help from the Germans and Italians to the tune of free weapons and fighters. The Spanish government, with ineffective support from Stalin’s Soviet Union, would continue to struggle against the Nationalists. By 1938, the war became a foregone conclusion due to the mismatch in forces. That same year 67 percent of Americans said they were sympathetic to the Loyalist cause and would be willing to have the United States help them. At the same time, leading isolationist Senator Gerald P. Nye proposed a resolution to repeal the U.S. embargo on sending weapons to Spain. However, Roosevelt declined, claiming that it was “too late to do any real good.” While this was true for the military fight, FDR also did not want to change his policy course because he hoped his covert plan to send weapons to the Loyalists would work. In the end it turned out to be a poorly coordinated and ill-conceived effort, and as a result was abandoned, leaving the Republic to fall at Franco’s feet.

In March 1939 Roosevelt claimed that the fighting in Spain had ended. Subsequently he removed the United States from its neutral and non-intervention position so America could be more belligerent toward all fascist powers in Europe. All told, 500,000 people died and 200,000 of the combatants—110,000 Republicans and 90,000 Nationalists—10 percent of all the Spanish conflict’s fighters, were killed. At the end of the fighting, Republican Spain’s last Foreign Minister Julio Alvarez del Vayo said, “no one should be able to deny that the collapse of the Spanish Republic was due to non-intervention.” The United States never denied it.

What can we glean from this short history of FDR and the Spanish Civil War to inform U.S. foreign- and defense-policy makers? First, if you’re going to send weapons, give them at a time when it can affect the outcome. Depending on the composition of the force the United States is trying to help, sending weapons after that force is close to defeat will be less useful than sending lethal aid when there is a chance to tip the scales. Further, showing support for the losing side during the fight will only hurt the American relationship with the winner after the conflict. Second, the motives of the adversary should always be considered when planning a response. It was clear that Franco and his German and Italian partners were not going to stop unless they were stopped. While FDR wanted to avoid a wider European war, that notion seems dubious when it was clear that fascist European actors were test-driving their future war plans on Spanish terrain. Finally, American public opinion is notoriously fickle on foreign policy issues, as the mood change toward having combat troops in Iraq and Syria to fight ISIS now demonstrates. FDR’s policy followed closely with the polls and general feeling in Congress. And while FDR seemed eager to help the Spanish government, he decided to follow the policy the American public asked for. By the time the people caught up with him, it was too late to do any good.

And what about the strategic insight we receive? Simply put, instead of just pondering whether or not to arm Ukraine, President Obama should also ask himself how the United States got itself back into this “arm/don’t arm” dilemma? The true test of a good foreign policy is not just in making the right decision when in a situation like this one, but rather avoiding this situation by getting out in front of problems from the start by shaping the environment. Whatever tactical decision the President takes now, it pales in comparison to the lack of strategic direction that got the United States, its allies, and partners to this point.

It is clear that the story of the Spanish Civil War and the war in Eastern Ukraine are not the same fights. They are different conflicts in different areas, with different circumstances, and in different times. Still, using history to help with current policy is a useful exercise. As Lawrence Freedman wrote on this site: “comparing and contrasting two apparently similar situations can be quite fruitful, so long as the aim is to identify recurring dilemmas rather than to draw lessons.” But, he warns, the mistake of making historical analogies “lies in assuming that following the same policies will produce the same outcomes.” With this being the case, if President Obama decides to not intervene in the war in Ukraine, it does not necessarily mean that Russia will overrun the country. In fact, that outcome is unlikely. As of now it does not appear that Putin’s Russia has any designs on outright annexing the entire country. That was Franco’s design for Spain and he achieved it; Putin’s designs are more tailored to keeping control over eastern parts of Ukraine and Crimea while fracturing the current political order.

So can we use the Spanish example to make a case one way or the other on arming the Ukraine government against Russia? Not exactly. The variables are too disparate to expect a similar outcome for a similar policy choice. In fact, no historical analogy should be used to justify a future policy decision. However, in this case, the Spanish Civil War reminds us that the decision to arm or not has both tactical and strategic implications beyond the act of arming. This is the “dilemma,” as Freedman put it, that current policymakers must keep in mind when thinking about Ukraine and Russia—and why the Spanish Civil War still proves a useful historical episode for the United States.

Alex Ward is an Assistant Director of the Atlantic Council’s Brent Scowcroft Center on International Security where he works on U.S. defense and military strategy and policy. He tweets at @AlexWardB.