The United States Needs to Get Serious About Artillery Again 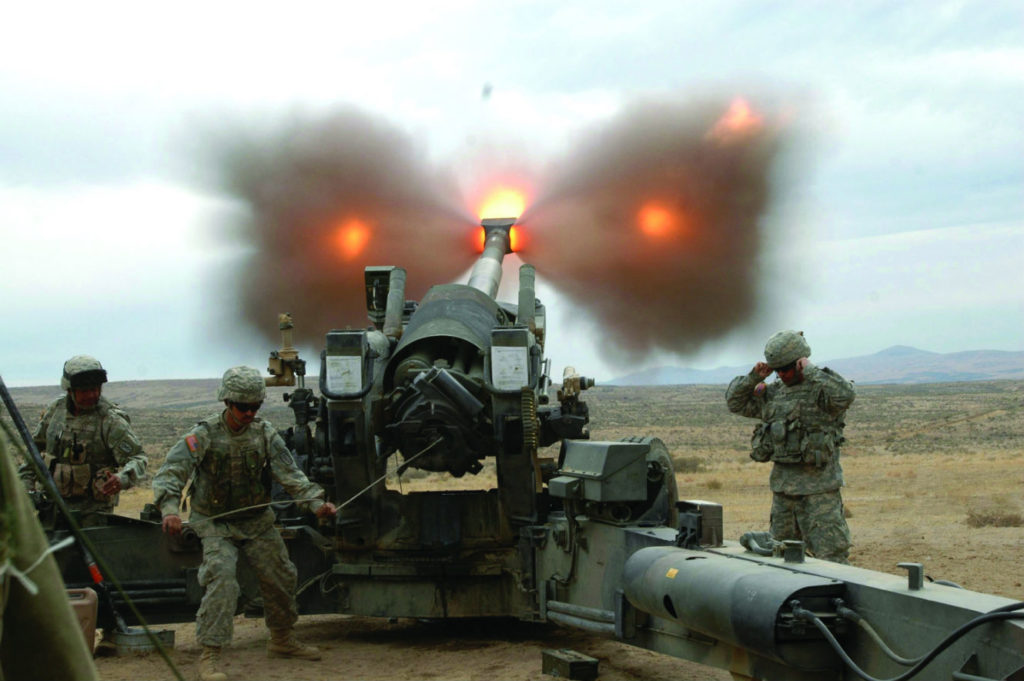 As the United States and its allies in Europe watch NATO’s eastern flank with increasing concern over Russian aggression, the U.S. Army’s artillery capabilities have rightfully received more scrutiny and public attention. Artillery might very well be the decisive factor in how a war with Russia would play out. Over the summer in The Washington Post, one of us described how the supremacy of U.S. Army warfighting capabilities have been eroded by the steady advance of Russian warfighting capabilities in recent years. The Russians have made formidable improvements to their ground-based artillery systems in terms of range and lethal effects. Many of these Russian artillery upgrades are in flagrant violation of their international treaty obligations under the Intermediate-range Nuclear Forces (INF) Treaty. Meanwhile, the United States is unilaterally implementing highly restrictive policies that essentially eliminate the U.S. military’s ability to destroy enemy armor formations. These self-imposed restrictions, together with a general neglect of improvement to artillery range and destructive power, leaves the U.S. military vulnerable in a ground fight with a capable peer or near-peer adversary, including Russia or China.

As it turns out, the state of play is, in fact, even worse than previously described. While the U.S. Army has made major advances by incorporating precision into artillery, the ability and opportunity to employ precision are premised on a world of low-intensity conflict. In high-intensity conflict defined by combined-arms maneuver, the employment of artillery based on a precise point on the ground becomes a much more difficult proposition, especially when the enemy commands large formations of moving, armored vehicles, as Russia does. The U.S. joint force has recognized this dilemma and compensates for it by employing superior air forces and deep-strike fires. But Russia has undertaken a comprehensive upgrade of not just its military technology but its doctrine. We should not be surprised that Russia’s goal in this endeavor is to offset U.S. advantages in air superiority and double-down on its traditional advantages in artillery and rocket mass, range, and destructive power. According to recent studies by the RAND Corporation, Russia is well on its way to achieving these goals. For the first time in decades, it could well be that America’s warfighting edge is dependent on regaining artillery parity and, eventually, superiority.

The picture may be somewhat bleak, but there are a number of ways the United States can regain dominance over Russia in artillery and surface-to-surface rocket fires. First, the United States has to change its policy on the use of cluster munitions. The U.N. Oslo Convention on Cluster Munitions adopted in 2008, commonly referred to as the Oslo Treaty, was intended to eliminate cluster munitions. These munitions, long a standard in major military arsenals, became a major concern, especially in the humanitarian community, because they have high unexploded ordnance rates and can therefore present hazards to civilians for decades after a conflict ends. Many nations signed the Olso Treaty, including the vast majority of America’s allies, but some of the most significant powers in the world, including China, Russia, and – yes – the United States, have not signed the agreement. But for purely political reasons the Department of Defense, at the end of the Bush administration, elected to implement its own policy that essentially holds the United States to the terms of the treaty. This U.S. policy, continued during the Obama administration, allows for the continued use of cluster munitions but places a 99 percent reliability criteria on them making them almost cost-prohibitive to develop.

The Oslo Treaty has an exemption for a specific class of sub-munitions, known as sensor-fuzed munitions (SFM). Unlike standard cluster munitions, SFM have a much smaller number of sub-munitions than the traditional cluster munition. And they are very precise, specifically designed to seek out armored vehicles and blast holes through the top of them. Because SFM sub-munitions are precise and fewer in number, they don’t pose the same unexploded ordnance hazard as standard cluster munitions. Unfortunately, U.S. policy does not have the same exceptions as the Oslo Treaty that would allow for these munitions without major testing. Fixing this policy would allow the United States to acquire a better munition for destroying armored formations and potentially save hundreds of millions that would have otherwise been spent on reliability testing. Extensive testing is an expensive proposition for high technology rounds with only ten or fewer sub-munitions that already comply with the Convention on Cluster Munitions.

Another potential quick win for artillery is to invest in readily available technology to regain advantages in range for both cannons and rockets. The U.S. Army is one of only a few forces in the world still using the short tube (39 caliber) on its self-propelled howitzers. Most countries, friend and foe alike, have adopted the longer tube (52 caliber) which alone can increase the range by as much as 15 percent. With technology readily available and the current U.S. fleet of self-propelled howitzers currently going through upgrades, now is the perfect time to upgrade the cannon tubes. That simple upgrade together with increased energy in propellants and rocket assistance could quickly increase current U.S. cannon range by as much as 100 percent, enabling the U.S. to regain overmatch against the Russian military by as soon as the mid-2020s.

Opportunities exist for regaining range overmatch in rocket munitions as well. The U.S. Army recently approved the new Long Range Precision Fires (LRPF) rocket as a formal acquisition program. The LRPF is meant to replace the now terminated Army Tactical Missile System (ATACMS). But like ATACMS the LRPF system is limited to a range of 500 kilometers because of the bilateral INF Treaty with Russia, which limits each side to a medium range missile range of 500 kilometers or less. Russia has clearly expressed its disinterest in its commitments under this treaty. For example, Moscow has developed and tested a new medium-range missile that exceeds 500 kilometers. Since this treaty is essentially a dead letter in Russia and since no other potential adversary has ever recognized a 500-kilometer limitation, now might be the time for the United States to consider reevaluating its commitment to the INF Treaty before development begins on LRPF.

Finally, the United States should rebuild its artillery forces to pre-911 levels. The number of active component field artillery brigades and division artillery is a fraction of what it was in the 1990s, relative to infantry units. Within our remaining field artillery formations, the number of platforms and munitions available are grossly insufficient for sustained major combat operations. Without air superiority, a conventional big war fight opens with a duel between adversary artillery systems referred to as the “counter-fire fight.” In this duel between opposing artilleries the winning component is mass. The Russians have not forgotten the devastating effects of overwhelming mass fires as they’ve demonstrated with deadly consequences to the Ukrainian military. This provides a cautionary tale. Just imagine how horrible the consequences should the U.S. Army be subjected to such a horrific bombardment with no effective means for responding.

Mike Jacobson is an artillery analyst at the Army Capability Integration Center and a field artillery lieutenant colonel in the Army Reserves. Retired Major General Bob Scales is a former Commandant of the Army War College, an artilleryman and author of the new book, Scales on War: The Future of America’s Military at Risk just published by the Naval Institute Press. The opinions here are those of the authors and do not represent the positions or views of the U.S. Army, the Department of Defense, or any organization therein.